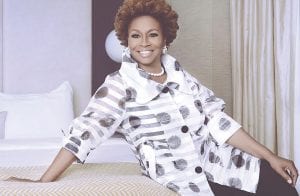 FLINT — One of Hollywood’s most familiar faces, activist, comedienne, singer and award-winning actress Jenifer Lewis will speak about her career, her activism and her new memoir “The Mother of Black Hollywood” as part of the Ballenger Eminent Persons Lecture Series of Mott Community College (MCC) on May 11.

“I am so looking forward to coming to Flint in light of the challenges facing the city,” said Lewis, a long-time advocate for civil rights, HIV awareness, and mental health awareness. “I am inspired by the resiliency and determination of the people of Flint to fight for their right to safe drinking water.”

In addition to her public address on Friday, Lewis will also meet with MCC students and community activists during her time in Flint.

Currently starring on the Emmynominated hit show “black-ish” on ABC, Lewis’ portrayal of Ruby Johnson has earned her a nomination for the 2018 Critics Choice Award for Best Supporting Actress in a TV comedy series.

Lewis has a long filmography of movie roles, including playing Tina Turner’s mother in “What’s Love Got to Do With It,” Whitney Houston’s mother in “The Preacher’s Wife,” and the mother of Tupac Shakur’s character in the film “Poetic Justice.”

Best known for her Hollywood success, including regular roles on “The Fresh Prince of Bel-Air” and “Strong Medicine,” Lewis has also had a wide-ranging and varied career in music, voice acting and theater. She has performed in four Broadway shows, sung with the New York Pops orchestra at Carnegie Hall, and performed as the voice of Flo in the animated film “Cars,” and the voice of Mama Odie in the animated film “The Princess and the Frog.”

She is also a social media sensation and has garnered more than 100 million views with such viral hits as “In These Streets,” with Brandy and Roz Ryan.

Lewis’ accomplishments as an entertainer and community activist have been recognized by the NAACP Lifetime Achievement Award in Theatre, the American Black Film Festival’s Career Achievement Award and an honorary doctorate from her alma mater, Webster University in St. Louis. Fans can follow Jenifer on Instagram (@jeniferlewisforreal), Twitter (@ JeniferLewis) and Facebook (Jenifer Lewis For Real.)

The Ballenger Eminent Persons Lecture Series, named for benefactor William S. Ballenger, Sr., brings prominent individuals to the college to lecture on topics of social, cultural, economic, scientific and historical significance. It was created to enhance educational opportunities for MCC students as well as creates a public discussion of issues facing the greater Flint community.