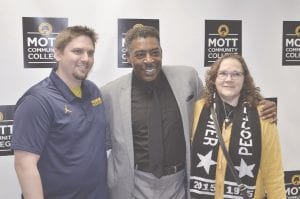 Hudson, best known for his role as Winston Zeddemore in the Ghostbusters film franchise, took time to meet and greet with fans and headline an Actors Studio forum held at the MCC Event Center last Thursday.

Joined by MCC President Beverly Walker-Griffea, Hudson discussed some of the most riveting and humorous parts of his show business career, while offering a wealth of advice to students in the audience.

“There was never a question that I could accomplish my dream of becoming an actor,” he said. “It was about me preparing myself and knowing that (success) was coming.”

For Hudson, 73, success in the acting business has translated to a long and productive career spanning five decades. He has starred in dozens of hit TV and movie productions, landing prominent roles such as Sergeant Darryl Albrecht in the 1994 fantasy/ action film “The Crow” and Warden Leo Glynn on HBO’s prison drama series “Oz.”

Hudson’s road to becoming an accomplished actor wasn’t easy; his mother died when he was an infant, and he grew up without knowing his biological father. He also married when he was just 18 and had difficulty getting into college because he “didn’t take high school grades very seriously.”

But Hudson’s grandmother, who raised him in Benton Harbor, MI, played a huge role in developing his work ethic and convincing him to believe in himself—rather than his circumstances.

Hudson moved to Detroit after a stint in the United States Marine Corps and enrolled at Wayne State University. There, he received his bachelor’s degree and became a resident playwright at Concept East, the oldest black theater company in the United States.

Having developed his acting and writing skills, Hudson graduated from Yale University’s School of Drama and started pursuing a movie/ TV acting career in the 1970s. His initial roles were small, but Hudson’s resume grew over time, leading up to his breakthrough part in the first “Ghostbusters” movie (1984).

During the Q & A session of the event, Hudson encouraged aspiring actors in the audience to get proactive by creating their own projects, rather than just auditioning for roles.

“Actors used to be the force that drove the industry, now it’s writers and producers,” he said. “I think your career is in your own hands. You’ve got to be part of the full creative process by writing and producing.”

He also reminded students about the importance of working with colleagues and seeking out mentors to study under.

“People will come into your life who will help you,” he said. “But if you’re so focused on what you’re not, then you won’t see them. Collaborate with people who respect your work.”

As for the present, Hudson has no plans of slowing down with his career. He is currently starring in a lead role on the BET drama “The Family Business” and has a major supporting role in the upcoming TV series “LA’s Finest.”

Hudson’s special guest appearance at Mott was sponsored in part by the Ballenger Trust and the United Way of Genesee County.