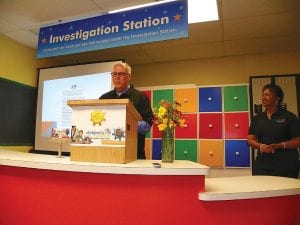 Across the room, a young boy shopped for groceries at the Smart Mart, a replica supermarket that is one of the most popular attractions among more than 40 exhibits at the Flint Children’s Museum, 1602 W University Avenue.

The slogan is part of a free multimedia ad campaign, valued at more than $100,000, created for the museum by the American Advertising Federation of Greater Flint (AAF-GF).

AAF-GF chose the Children’s Museum as the 2012 recipient for its biannual Create & Collaborate Project. Since 2008, the group has chosen one local non-profit every other year for the honor.

The Boys & Girls Club of Greater Flint was the 2008 recipient and Habitat for Humanity was the 2010 recipient. 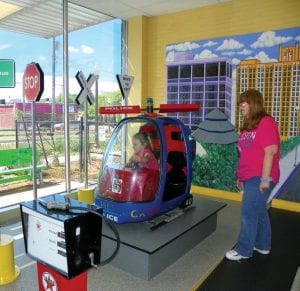 The Flint Children’s Museum features a Smart Mart where children can take a “flight” in a police helicopter.

At a press conference last week, AAFGF unveiled the results of its efforts on behalf of the Children’s Museum.

That included colorful images of children at play with a script inviting target audiences to “remember the last time you took the kids someplace where they didn’t want to leave. Where digital games were forgotten and exploration was the task of the day. Where something meaningful was learned without even knowing it.”

The comprehensive ad campaigns were scheduled to launch on June 15.

“To say that we are grateful is an understatement,” said Brian Dilworth, executive director of the museum.

Kimberly Roddy, museum director of public relations, added that the museum has tremendous growth potential and the ad campaign is just the start of “good things” happening.

“I am super excited to see where the museum goes, she said, adding that increasing public awareness is very important.

“Everyone is reaching out to us in trying to make this summer special for our kids,” said Dilworth, who invited guests to tour the museum to see what’s on offer.

In addition to exhibits, the museum offers a full calendar of daily activities. For example, a Watermelon Seed Spitting contest is scheduled for June 23, a birthday party for Princess Diana is coming up on July 1 and on July 7 children visiting the museum can celebrate National Ice Cream Cone Day by learning how to make homemade ice cream. See the complete calendar online at www.flintchildrensmuseum.org/ or call (810) 767-5437.

The AAF-GF is made up of local advertising, marketing and communications professionals. Every other year, it takes applications from non-profit organizations interested in becoming the next candidate for the Create and Collaborate Project.

“The Create and Collaborate Partnerships provides thousands of dollars in professional consulting as well as professional media design,” Perry said.

Flint’s program is being watched with interest by other AAF clubs, according to Chris McDonald, AAF District 6 governor and past president of AAF-GF. Other clubs in the district are doing