Advocates rally against The Family Puppy 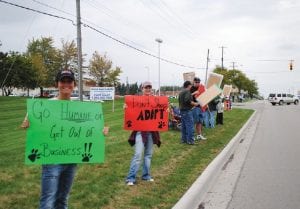 FLINT TWP.
— Fourty-four advocates protested against The Family Puppy at Genesee Valley Mall Sept. 18, the culmination of a campaign by Puppy Mill Awareness against the pet store.

Sporting homemade signs with a variety of messages about puppy mills and the need to adopt rather than shop, the peaceful rally ran from noon-3 p.m. and was organized by Pam Sordyl of the awareness group.

“I was overwhelmed with the enthusiasm from the Flint campaign crew. We had 44 dog advocates coming out to make a difference for animals sold in pet stores. Friends of Genesee County Animal Shelter were well represented: nine volunteers and foster parents. PAWS Rescue and members of the HUSU were also in attendance,” she said. “Many new local supporters made their own signs, showed interested in future rallies and wanted to join the group. We kicked off our campaign in March after meeting with Mall Management and talking with the owners about switching to adoptions only. Overall, it was indeed a peaceful rally with no issues with the mall security or police. The only thing that wasn’t peaceful was all the supportive honking we received.”

Sordyl began organizing the rally against The Family Puppy, owned by John and Debbie Stottele, focusing on “the fact that The Family Puppy and their other chain stores, The Family of Pets, continues to work with brokers and mass-producing commercial breeders whom the USDA (United States Department of Agriculture) has cited for violations of the Animal Welfare Act.”

According to a press release, the Puppy Mill Awareness Group said it conducted its own investigation, revealing that The Family Puppy has worked with breeders from Minnesota, Missouri, Indiana and Ohio in 2009 and 2010, and that an inspector from the United States Department of Agriculture’s Animal and Plant Health Inspection Service (USDA APHIS) found unacceptable conditions for breeding dogs at one of the store’s breeders.

Stottele, who held a media alert the same day of the rally, said 90 percent of the puppies come from Indiana, and he receives them from 19 Amish breeders. Stottele said breeders are given the store’s regulations, and he regularly visits the breeders to ensure regulations are being met.

Stottele admitted that in the past, the store purchased bought from distributors, but now the store buys puppies directly from breeders. He believes Sordyl’s position of stop selling puppies and promoting adoptions is “staunch” because “the public deserves to make a choice.”

“We want people to go to the shelter, but not every family can adopt a dog,” he sad. “The options are one, get a dog from a show breeder; two, get a dog from a casual breeder; three, go to the shelter; or four, go to a pet store that works with a professional breeder. But to say you can’t shop and only adopt is not fair. We all need to work for animal welfare, and that’s what we do.”

“There is no reason to breed or buy a dog when animals are dieng in shelters,” Sordyl said. “Nearly 3,000 canines alone were euthanized last year at the animal shelter on Pasedana in Flint.æ