Aerotropolis, casino among initiatives that could rejuvenate twp 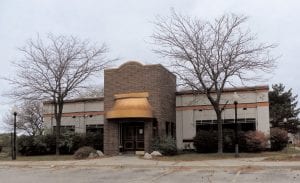 The future is looking brighter on the economic redevelopment front for the former Bennigan’s restaurant on Austin Parkway which has been purchased by owners next door of the Vehicle City Harley-Davidson dealership, which only a few years ago was the rundown site of the longvacant Chi Chi’s restaurant.

FLINT TWP. — A Popeyes fast-food chicken restaurant and maybe a local Whole Foods Market are among prospects on the economic development radar for the township.

Both businesses were among those discussed by the Economic Development Corporation (EDC) at its annual meeting last week.

Whole Foods coming in is just a rumor that’s been circulating, said Tracey Tucker, economic enhancement director, who plans to directly contact the company to see if there’s any truth to it.

Popeyes, however, is preparing to move into a Miller Road site vacated by Kentucky Fried Chicken last year. It would be the second Popeyes in Genesee County.

Tucker gave the board updates highlighting several other businesses moving into the township or expanding.

In recent years, overall economic development has been so slow, the EDC only meets once a year as required by law to retain its fiduciary status. In better times, the EDC met weekly to fulfill its duties, said Rajeshwar Gupta, a longtime member. When development began to slow down, EDC meetings were held quarterly but for the past few years has only needed an annual meeting to conduct business, he said.

But Tucker forecast a brighter outlook ahead. For one, the establishment of a Next Michigan Development Corporation (NMDC), also known as an Aerotropolis, promises not only new business for the region but a shot in the arm for the township economic redevelopment, Tucker said.

The NMDC is a consortium of four counties overseeing efforts to attract businesses along the I-69 Trade Corridor and Bishop Airport.

“They are trying to get funds from all over wherever they can get them from,” Tucker said.

When that happens, it could give the EDC purpose again as the designated entity to handle funding projects. That has yet to be determined, Tucker said, but noted that it would require the EDC to meet more often.

“Ii could very well make our EDC relevant again and get us doing some projects,” Tucker said.

Plans for a Bay Mills Indian Tribe owned -casino remain on hold until legal challenges are resolved to its right to establish casinos anywhere it owns land.

Township Supervisor Karyn Miller said she contacted the tribe about two weeks ago and was told there is no movement pending a superior court decision.

Tucker also reported progress on some big-box vacancies. Owners of the former Circuit City store on Miller Road are exploring an idea to divide the large space into one anchor store and two smaller ones.

But so far there are no prospects for the former Border’s bookstore located in the same plaza.

Meantime, several manufacturing and industrial firms have grown so much they had to move to larger facilities, Tucker reported.

“We’ve had a lot of people coming in and taking over some of these older buildings and repurposing them and it has been really good,” she said.

Also the Vehicle City Harley- Davidson complex on Austins Parkway expanded this year and also has purchased the property next door formerly occupied by Bennigan’s restaurant.

“So probably in the next year we will se something going on there as well,” Tucker said.

The EDC elected officers for the coming year and set its next annual meeting for 5 p.m. May 15, 2013.