After 47 years and 77 days on the job, Skaff salesman retiring 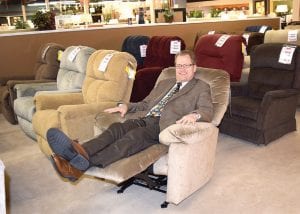 Pat Kane is ready to retire to his recliner after 47 years on the job.

FLINT — Hall of Fame baseball player Al Kaline spent all his 22 years in the majors with the Detroit Tigers.

Add all those years together and the total still falls a little shy of the time Hall of Fame salesman, Pat Kane has spent as an MVP on the Skaff Furniture & Carpet team!

“It really is a remarkable achievement,” smiles Skaff Furniture and Carpet President, Dick Skaff. “The funny part is when Pat told me about his retirement, he admitted to being puzzled about exactly what to say because he’d never left a job before!”

According to Skaff, who did some serious mathematical calculations, Kane has accounted for more than $17 million dollars in sales over the years.

Starting out Kane worked as a stock boy and was self-described go-fer at the Skaff Harrison Street store location in downtown Flint.

“I worked in the stock room, unloading trucks. I’d go get coffee and sandwiches for lunch, all that kind of stuff. After a few months, they started asking me to bring a tie in to work so when the store was really busy, I could step out of the stock room and pinch-hit on the sales floor,” recalls Kane. “I really enjoyed helping with the customers. I loved what I was doing and made a good living at it and before you know it, almost a half century had passed.”

What makes this story even more incredible is that Pat Kane met Patricia, his wife of 43 years, while working at Skaff. At the time, Patty was a receptionist at the downtown store.

The couple live in Grand Blanc and have two grown children, Adam and Ryan.

In 2006, Kane was inducted into the Skaff Furniture and Carpet Hall of Fame honoring long-time loyal employees and customers.

“Pat was one of our original inductees. In fact, he’s been at the store throughout my entire career here,” smiles Skaff. “It’s going to seem really strange not to see him on our sales floor. I can’t even begin to say how much we will miss him.”

Skaff Furniture-Carpet One has been a family-owned business in Genesee County since 1911, and recently celebrated its 104th Anniversary. The 70,000 square-foot Skaff Warehouse/Showrooms are located at 23-Expressway and Hill Road. — G.G.