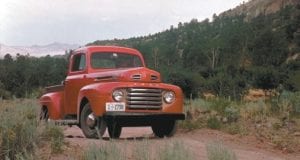 The Ford F-Series truck, a perennial bestseller for the Dearborn- based U.S. automaker, is celebrating its 65th year on the market.

The general public got their first view of the vehicle that would come to personify “Built Ford Tough” in years to come on Jan. 16, 1948. It was Ford’s first post- World War II new product and, as such, carried a lot of weight as a harbinger of the company’s competitive future.

And what a solid future was born that year. Global new vehicle registrations for F-Series totaled 785,630 trucks last year, putting it in the No. 3 spot among all vehicles sold worldwide, and, according to Ford’s data, the F-Series has been America’s best-selling pickup for 36 straight years.

Back then, the all-new F-Series pickups had three available powertrain combinations: A 95 horse- power six-cylinder engine; a 100 horsepower V8; and a 145 hp V8.

Eric Peterson, Ford F-150 Marketing manager, says, “Exterior appearance is so very important. The truck had to convey a sense of capability, but ultimately, if it wasn’t durable and reliable, that would have played itself out, so it was a good way to get started.

“F-150s all had that look, and we just launched a concept truck, the Atlas, and it’s got this presence that conveys capability even though no one’s been able to drive one,” he said.