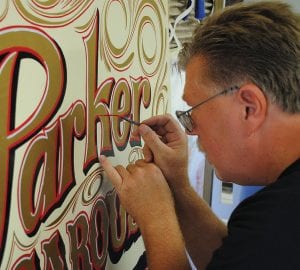 Brian Ashley puts the finishing touches on one of the signs at Crossroads Village. Ashley stands with Chief, one of the well-known horses for the C. W. Parker Carousel. Ashley also is restoring the horses for the carousel, which was built in 1912.

FLINT
— When visitors enter Crossroads Village, chance are they will notice improvements to signs along the boardwalk and the C. W. Parker Carousel, and all of those improvements can be attributed to artist Brian Ashley.

Ashley, a Burton resident, has poured his heart, soul and talent into replacing three signs for the boardwalk and restoring the carousel horses on the C.W. Parker Carousel. Utilizing his airbrushing techniques, which he began in 1978, Ashley has transformed the signs, which were done more than 25 years ago, giving them his own special, hand-crafted touch. When asked why he turned to airbrushing, Ashley cited a well-known icon from a few decades ago.

“Back then in the 70s, vans were airbrushed and that got me interested,” he said. “I always did art, and one thing led to another. A guy taught me the ground rules in doing signs, and I incorporated airbrushing with the lettering and from there, it took off.” 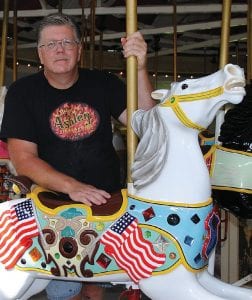 Since then, Ashley has airbrushed custom cars and nine years ago, he airbrushed a motorcycle for actress Ann Margaret, creating a customized lavender creation with daisies. He also has airbrushed a patch for the 1986 space shuttle, which is housed at the Military and Space Museum in Frankenmuth.

Ashley became involved in the work at Crossroads Village when Dan Gosnell, the master craftsman who worked there and originally did the signs, passed away. First, staff at Crossroads called his fiancee, artist Terry Rozyla, to see if she was interested in working on the projects. Rozyla, who is the volunteer coordinator/humane educator for the Genesee County Humane Society, had created the mural on back and side of the carousel’s chariot ride. Together, she and Ashley worked on the pony cart attraction behind the carousel. Afterwards, the opportunity came to do the carousel and Ashley was ready.

Built in 1912, the C. W. Parker Carousel has 40 horses on it, a Nanny’s Bench and chariot, and is in need of some serious TLC after providing entertainment to scores of children and adults over the years.

Approximately 15-20 years ago, the horses were fully-restored but little work has been done on them since. While the signs took him three months to complete and install, the restoration of the horses will take a bit longer. Ashley said it takes him two weeks to do one horse, and out of the 40 horses, he has completed all but 10. He anticipates to be completely finished with the restoration work on the C. W. Parker Carousel in one year. When all the work is completed, Ashley will have spent three years working on the signs and carousel.

“It’s so rewarding to be doing the horses,” he said. “It’s pretty cool to be a part of this.”

When he’s not working on projects, Ashley teaches airbrushing classes through Davison Community Enrichment and Recreation. “It’s one of the most rewarding things I’ve done,” Ashley said of teaching. “I’ve met some good people.”

Ashley recalled his first class, and his initial notion that the students would have some prior knowledge or skills in airbrushing. To his surprise, hardly any of those first students knew about airbrushing. “I’ve learned to teach on a slow basis,” he laughed.

But despite slowing down his teaching process, Ashley is proud of the results. “Out of 150 people, I’ve never had one person not learn how to airbrush,” he said.

Those wanting to see Ashley’s artistry can head to Crossroads Village, 6140 Bray Rd. Hours are 10 a.m.-5 p.m. Wednesday- Sunday during the summer season which ends Sept. 6. for more information on Crossroads, visit www.geneseecountyparks.