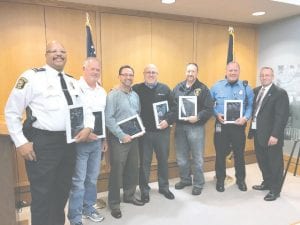 FLINT — On October 24, the Bishop International Airport Authority presented resolutions honoring seven airport employees for their heroic actions on June 21, 2017, when a terrorist brutally attacked Public Safety Lieutenant Jeffrey Neville, stabbing him in the neck, according to a press release.

Authority employees, Lt. Jeffrey Neville, Maintainer, Richard Krul, Public Safety Officer Lt. Dan Owen, Chief Christopher Miller, and Public Safety Officers Chris Curnow, Michael Chilson and Christopher Tolan all received plaques commending them for their brave and instant responses, courageously fighting off and then subduing the terrorist, as well as to giving immediate first-aid to save the life of Lt. Neville. Lt. Neville was hospitalized after the attack, but has returned to full health.

Airport Board Chairperson, Winfield Cooper III, lauding these gentlemen stated, “The Board is honored to be recognizing these members of our airport family, who put duty over self.”

The Airport Authority commended these employees, who put the greater good ahead of their own well-being, who went above and beyond the normal call of duty in order to protect their fellow employees as well as the traveling public.

Also last week, Krul, an airport maintenance worker, was awarded the Sons of the American Revolution Medal for Heroism. Krul’s heroic actions saved the life of Officer Neville, and perhaps countless others, when he stepped in and helped to subdue the attacker.

On October, 24, Sons of the American Revolution, Michigan Society, Paul Emery Chapter awarded Krul with one of its highest forms of recognition: the SAR Medal for Heroism, for his exceptional deeds. This award recognizes “outstanding bravery and self-sacrifice in the face of imminent danger for acts that involve great personal courage and risk to the recipient”.

Additionally, on Friday, October 27, Congressman Dan Kildee introduced a Congressional Resolution honoring the heroes of the airport terrorist attack. Kildee’s resolution condemned the violent attack and thanked the airport employees and first responders who worked to subdue the attacker and prevent further harm to other people. The full resolution can be read at dankildee.house.gov/sites/ danielkildee.house.gov/files/KILDMI_ 079_ xml.pdf

“Like many in our community, I was horrified by the violent attack at Bishop Airport,” said Congressman Kildee. “I have known Lieutenant Neville for years and he is a true public servant in our community. Lieutenant Neville, Chief Chris Miller and Richard Krul showed true acts of courage to subdue the attacker and prevent him from harming anyone else. This congressional resolution is a small act of gratitude to everyone at the airport who keeps our community safe and reaffirms Congress’ commitment to combat all forms of violence against our law enforcement.”