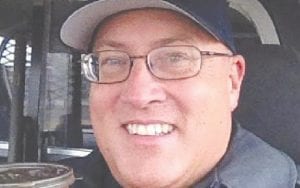 Lt. Jeff Neville of the Bishop Airport Police, who was stabbed June 21, 2017 in an alleged attack by Amor Ftouhi of Canada. Photo provided

FLINT TWP. — The lawyer for Amor Ftouhi, the Canadian citizen accused of stabbing a police officer last year at Bishop International Airport in Flint, has withdrawn her tentative request to seek a diminished capacity defense for her client. Attorney Joan Morgan filed the paperwork last week.

That means absent any new developments, the case will go to trial Nov. 5 at the U.S. Courthouse in Flint before U.S. District Judge Linda V. Parker. The Court plans to summon approximately 100 potential jurors beginning Nov. 5.

Ftouhi, a Tunisian national, is accused of stabbing a police officer during a terrorist attack at Bishop International Airport in Flint last year. He was scheduled to undergo psychiatric tests, but with his lawyer’s decision to withdraw the request for a diminished capacity defense put the trial on track for November.

Ftouhi, 51, whose outbursts have marked previous court appearances, is tentatively scheduled to stand trial Nov. 5 on three counts, including committing an act of terrorism transcending national boundaries, which is punishable by up to life in prison.

He is accused of stabbing Bishop Airport police Lt. Jeff Neville, who survived the attack, on June 21, 2017.

Witness accounts of the incident indicate Ftouhi walked up to the airport police officer, yelled “Allahu Akbar,” pulled out a knife, stabbed the officer in the neck and said, ‘You have killed people in Syria, Iraq and Afghanistan, and we are all going to die,’ ” according to the federal criminal complaint against Ftouhi. — G.G.