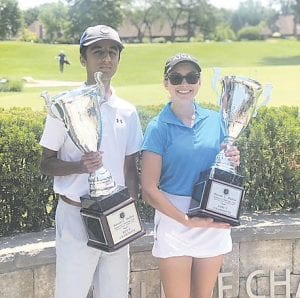 Ranveer Ajimal of Grand Blanc and Jolie Brochu of Flint Powers Catholic took home top honors in both the boys’ and girls’ divisions during the FJGA’s Mallon Cup on Monday at Warwick Hills. Photo provided

GRAND BLANC – High schoolaged golfers in the Flint Junior Golf Association’s (FJGA) Jack Nicklaus group made their way to the prestigious Warwick Hills Country Club to compete for the second major award of the season, the Mallon Cup, on Monday. In the girls’ championship flight, Jolie Brochu of Flint Powers Catholic earned her second win of the FJGA season – and second-consecutive Mallon Cup title – with her round of 78. On the boys’ side, it was Ranveer Ajimal of Grand Blanc shooting an even-par 72 to come out on top.

Finishing tied for second on the boys’ side with a pair of 80s was Swartz Creek’s Cameron Beckwith and Grand Blanc’s Ashton Gaulin. Dominic D’Anna of Lapeer and Jack Kolka both finished with 81s, Dylan Conte of Fenton, Andrew Nestor of Flushing and Connor Jewell of Swartz Creek all carded 82s and Robert Burns and Powers’ Sean Spidle finished with 83s. Travis Gist of Davison carded an 86, Coy Wilson finished with an 88 and Zach Limas, Jake McGeary of Lapeer, Grant Foren of Grand Blanc and Andrew Campbell all carded 89s. Ryan Truchan of Grand Blanc finished with a 90, along with Austin Buchanan and Lapeer’s Sean Nolan.

Last Monday, the Jack Nicklaus Group competed for the Henrickson Award, the first of three major awards throughout the FJGA’s summer season, at Clio Country Club. Winning the award on the girls’ side was Brochu, who carded an 82, while Conte won on the boys’ side with a 79.

The Jack Nicklaus group travels to the Flint Elks on Monday to compete for its final major award of the season, the Mancour Cup. For full weekly results and to see the upcoming schedule, visit www.fjga.org.