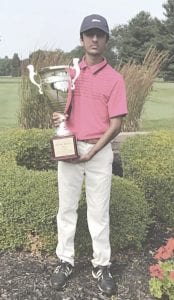 Ranveer Ajimal of Grand Blanc takes a photo after being named the FJGA’s Braun Cup champion for the boys’ division in the Jack Nicklaus group.

DAVISON – Youth golfers in the Jack Nicklaus group of the Flint Junior Golf Association (FJGA) wrapped up their regular season Monday at Davison Country Club. Kearsley’s Grace Hoffman finished with a 78 to lead the girls’ division, while Ranveer Ajimal of Grand Blanc carded a 71 to secure yet another win in the boys’ division.

Monday’s final round saw both Ajimal and Goodrich’s Elizabeth Gibbs named as Braun Cup champions for both the boys’ and girls’ divisions, respectively. The Braun Cup is awarded to the golfer in each division that earned the most points from high placements throughout the season. Ajimal had the award locked up before Monday’s round after winning all but one FJGA event this season, while Gibbs needed to finish inside the topthree to take home the hardware.

Gibbs finished second on the day with an 80 to secure her Braun Cup win. Davison’s Isabel Mabry followed in third with an 85 and a trio of 94s came from Alexandra Sexton, Olivia Rushton and Goodrich’s Madeline Swett. Amanda Miller carded a 95, Davison’s Brooke Kalisz, Swartz Creek’s Emily Wilson and Davison’s Olivia Canaday all finished with 96s and Kelsey Malone and Goodrich’s Emily Madill both carded 98s. 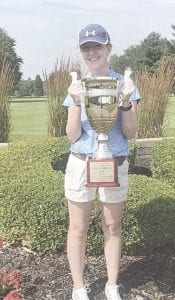 Elizabeth Gibbs of Goodrich was named the girls’ Braun Cup champion for finishing with the most points in the FJGA’s summer season. Photos Provided

The FJGA’s Jack Nicklaus group will wrap up its summer season with a threeday tournament at Swartz Creek Golf Course beginning Monday and finishing Wednesday. Only qualifying players from Monday’s opening round will be able to compete in all three days of competition. For full results, visit www.fjga.org.