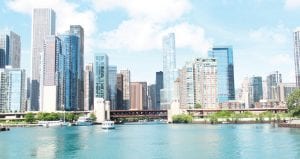 The Chicago skyline, as seen from the back of a river boat. The tour guide said that Chicago has “the second most beautiful skyline next to Hong Kong.” I’ve never been to China, but it has to be a close race.

I got a text from my boss a couple weeks ago asking me to call her immediately. Nobody wants to get a text from their boss that says that, but this was the rare and gleaming exception.

And it was that simple.

I couldn’t believe it. I got an email the following day saying that the flight was taken care of and that all I needed to do was post a few status updates on social media before we left, a couple of videos while on the trip and then write about it when we got back. Deal.

Bishop International Airport has introduced three nonstop daily flights to Chicago Midway on Southwest Airlines and somehow I became a spokesman. I felt like somebody was pranking me.

When I arrived at the airport (early) on the morning of June 8 and saw the conference room where we were supposed to meet, I realized this was no prank. I was the first to arrive and noticed the spread of snacks and beverages. Untouched. I debated sneaking some of it into my carry on. Decided I’d better hold off.

It wasn’t long before the other guests started to arrive and, somehow, strangely, there were familiar voices suddenly surrounding me. I didn’t recognize any of them, but I knew I’d heard those voices somewhere. Then I heard someone say “CK 105.5” and it clicked. I closed my eyes and realized they were all DJs from familiar radio stations. It’s odd to put faces to them.

As special guests, we moved to the front of the line to board the plane and were introduced to our fellow passengers, who I thought would be too tired to care. But they clapped. It was the first time I’d ever flown first class. Before I even got a chance to let it sink in, we’d already landed in Chicago. Less than 45 minutes.

It was about 7 a.m. We didn’t waste any time hopping on a train to the city. The tones of the machines at the train station were melodic and friendly, like folky Japanese arcade games, and the skylights poured sunlight onto the commuters. It was a beautiful day and it looked like everyone had agreed to enjoy it. 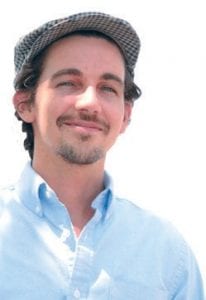 We went for breakfast at Little Goat Diner. The food was amazing. And I ordered a breakfast beverage to help ease my anxiety a bit. Scotch in the morning. That’s what the drink was called. Fitting. I looked at everyone after I ordered and noticed relief on their faces. They all followed suit without a second thought.

Next was the architectural river tour. The guide said that Chicago has “the second most beautiful skyline next to Hong Kong.” I can’t make that call, and it may have been general sense of awe (or that glass of scotch), but I have to say, they’re probably right. I swear my mouth was open for our full 75-minute tour. We rolled down an emerald river punctuated by architectural marvels and towering monoliths, all competing with each other in a race to reach heaven.

After the tour, we were turned loose on the city. I met up with an old friend and had lunch. And before you could say Dumb & Dumber, we were riding around Chicago on his motorcycle. We hung out for a bit before I went off to meet back up with the group for dinner at Lou Malnati’s. It was delicious. Everyone shared stories.

Once we were done, we waited outside for our ride only to be surprised by a limousine that rivaled the scope and fluorescence of the Vegas strip.

Then I was back on a plane, headed home to Flint. I looked around at everyone winding down and I closed my eyes. I felt overcome by something like love for Bishop International Airport.

I can’t explain the sense of camaraderie established between our small group that day. It’s a lot like that feeling you get when you skip school with a friend for the first time. I was more than grateful to have been granted that feeling again.

I was lulled to sleep by the hum of the plane and an overwhelming feeling that I had gotten away with something. I felt like Ferris Bueller with an expense account. Slept like a baby.

Check out more on my trip at our Facebook page www.facebook.com/viewnewspapergroup.