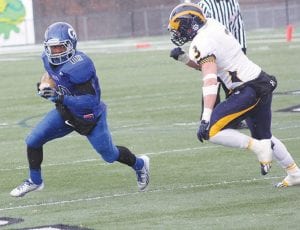 Carman-Ainsworth grad Jevonte Alexander was picked to play in the Borderr Classic, but couldn’t play because of an injury.

Alexander had been selected for the Michigan team by the Michigan High School Football Coaches Association, but he had undergone shoulder surgery in January and was not cleared to play by doctors, said Carman- Ainsworth coach Nate Williams.

Michigan defeated Ohio 27-14 in the inaugural Border Classic at the University of Findlay.

Alexander has signed to play at Indiana State University in the fall. – D.N.