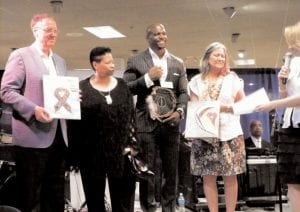 FLINT TWP. — The Love Boat set sail on a “Cruise for a Cause” last weekend. Art Van furniture store on Miller Road hosted the gala party as a benefit for McLaren’s soon-to-open Hospitality House.

Currently under construction on Beecher Road at a cost of $8 million, the Hospitality House will provide a place to stay for cancer patients being treated at McLaren’s state-of-the-art Proton Therapy Center due to open in the fall.

The McLaren Foundation was charged with the task of fundraising to offset the cost of the Hospitality House, said Don Kooy, McLaren-Flint president/CEO, in brief remarks to the crowd. Most Proton Therapy Centers in the U.S. have companion Hospitality Houses because about half of patients who come for five-to-nine week treatments live two or more hours away, he said.

Insurance does not cover lodging costs. The no-to-low-cost Hospitality House, due to open in June, will operate at a loss of about $400,000 a year, he said, emphasizing the need for fundraising. 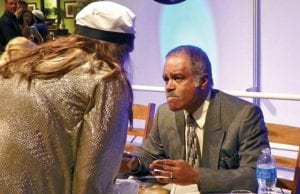 Ted Lange, aka Isaac from The Love Boat, autographs photos and chats with a fan.

“It takes one more worry off their minds when they have cancer, so for us to be able to provide lodging is important,’’ he said.

For tickets costing $100 each, Cruise for a Cause party guests got to meet and mingle with Hollywood actors Terry Crews, a Flint native, and Ted Lange, best known for playing the role of Isaac the bartender on the popular 1977-87 television series The Love Boat.

Art Van’s showroom was transformed into a party setting with a stage for a band by clearing furniture from a space condoned off by fabric partitions and a cruise ship backdrop where guests posed for keepsake photos with Crews and Lange.

Crews was almost a no-show due to a work conflict filming his next movie, “Draft Day” with Kevin Costner. Crews also is a former NFL player.

Crews praised the Hospitality House as a “tremendous idea’ that will allow cancer patients to have their families with them for support.

“If you even had a common cold, you need love and care and that one person who will hold your hand,’’ he said. “Just think if you have the worst fight of your life – cancer. Can you imagine trying to do it alone?”

He also said cancer treatment is “dear to his heart” because his mother Patricia, who has worked at McLaren for 13 years, is a cancer survivor.

“(Growing up in Flint) I was sitting in front of my little TV set watching “The Love Boat’’ every Saturday night right before “Fantasy Island,’’ he said, drawing laughter from the crowd.

Lange spoke of his own experience with a prostate cancer biopsy and urged all men over 50 to get annual prostate checkups.

“It’s cancer prevention. We don’t all want to end up in the hospital if we can prevent it’’ he said.

He also spoke humorously about working with Crews on the set of the TV sitcom “Are We There Yet?”

The party raised about $100,000 for McLaren’s Hospitality House and Nights of Hope fund.