All-Star football game to be held at Davison 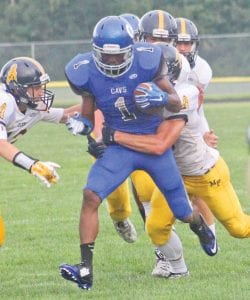 The contest, which is called the Flint Area All-Star Game, will be held at Cardinal Stadium at 7 p.m. Saturday, June 11 and feature some of the top seniors from teams across the area.

The game came about after Zimmerman talked with some people from the west side of the state who have held the same type of event. Zimmerman then went back and talked with the board who gave the OK for the event to be held.

“This is a great way to showcase the talent in the area,” Zimmerman said.

The players who will play in the event were determined by coaches throughout the area. They were then selected by the coaches of the two teams through a process similar to the National Football League draft.

Eleven players from Lapeer, LakeVille and Davison were selected for the game. Quarterback Elijah Hunt, running back Mike Marston and defensive back Aaron Hutton will represent Lapeer.

“Eli as the starting quarterback for Lapeer High School was 20-2,” Lapeer coach Mike Smith said. “He’s an excellent leader and had great command of our offense.

“Mike Marston is an explosive running back. He’s a hard runner that’s very elusive. He has good balance and good speed. His competitiveness was his greatest strength.

“Aaron Hutton is real explosive. He did a great job playing defensive back and wide receiver. He’s grown tremendously during his four years of football. I’m kind of anxious to see how he and the other guys are going to do.”

“I’m proud of them for all they’ve done,” Zimmerman said of his players. “This is a great opportunity for them.

“It gives them one more shot to play in Cardinal Stadium.”

There are 29 other players in our coverage area. They include Swartz Creek’s Derick Ross and Brett Pero, Goodrich’s Diavonte Todd, Donnie Adams, Landin Mitchell and Eric Hildebrand and Grand Blanc’s Zach Leedom and Ryan Honea.

Proceeds from the event will go to the Brandon Carr Foundation. The foundation will then distribute to funds to help various youth groups in Flint. – K.W.