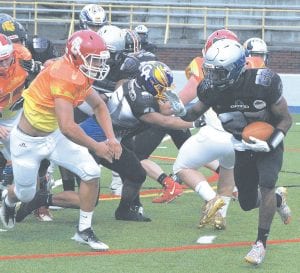 FLINT – The third-annual Flintarea high school All-Star football game had a bit of a different feel this year, and not just because of the new venue. Things got extremely competitive in what turned out to be a 10-0 win for Team Rise over Team Grind on Saturday at Kettering University’s Atwood Stadium in Flint.

The ball was moved up and down the field with ease, but six turnovers on downs kept the score at bay. After a scoreless opening quarter, Montrose’s Josh Shaski knocked home a 27-yard field goal for the game’s first points. It would remain 3-0 in favor of the Rise at the half.

The game’s only touchdown came late in the third quarter. After a long and successful drive, Flint Hamady’s Demetrius Davis punched it across from five yards out to extend the lead to 10-0, the final points of the night.

Bendle’s Tyrese Wynn intercepted a pass in the fourth quarter to give the Grind one more shot, but a turnover on downs put the game away.

Things got a bit heated throughout the contest, which led to a pair of player ejections.

Bendle’s Brent Scott completed 8-of-19 passes for 103 yards while the leading rusher was Lake Fenton’s Jackson Nevadomski with 61 yards on nine carries. Grand Blanc’s Alex Zaliagiris had a strong performance at receiver with five catches for 81 yards.