All tuned up and raring to go 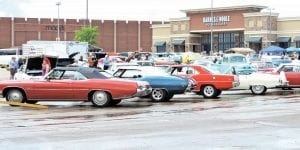 Zugata said he purchased the car two months ago and will be showing it off for the first time during Back to the Bricks cruising this year. The car was made in Flint, he said.

“All the numbers match.”

John Miller of Swartz Creek was also making his first car showing at Back to the Bricks this year. He bought his 1972 Cutlass Supreme Convertible about a year and a half ago and has shown it at other cruises but stayed home from BTB activities last year.

The sunny yellow car was built in Lansing and is all original from its paint job to its seat covers to the motor, he said.

Newly retired Dick Moldenhauer of Grand Blanc says he had a lot more time to show off his 1953 GMC pickup truck, starting at the ITT opening event, which had a 1950s theme and classic music like “Hot Rod Lincoln.”

“I hope it doesn’t rain,’’ Miller said about five minutes before the clouds burst, sending some car owners home instead of to the second leg of the day’s festivities at Genesee Valley Center mall.

Dick Moldenhauer of Grand Blanc said the rain didn’t bother him. He’d just roll up the windows of his 1953 GMC pickup truck and wait it out.

Moldenhauer bought the “shaved” but fully restored vehicle in 2012. Now after retiring in December 2014, he has “more time to come out and play,” he said.

He showed the truck last year – cruising on Wednesday, Thursday and Friday and in downtown Flint on Saturday, he said.

He also planned to make tune-up stops at Genesee Valley Center and Duke’s Car & Stereo later in the day.

“Driving Through the Decades’’ was the tune-up theme, featuring cars from the 1950s at ITT, from the 1960s at Genesee Valley and from the 1970s at Duke’s but vehicles from all years attended all three cruises.

Vehicles from all eras including this vintage Ford attended all of the day’s events.