All you can eat buffet reopens under new owner 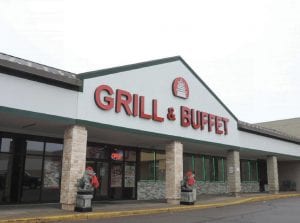 Grill and Buffet is now open in the Genesee Crossing shopping center on Miller Road.

FLINT TWP. — Rapidly flashing neon lights framing its large glass windows may already have called your attention to the fact that the all-you-can-eat buffet in the Genesee Crossings shopping center, near Target and Forman Mills, is open for business.

Now called Grill and Buffet, 3583 Miller Road, the restaurant reopened December 5 under new ownership, according to its manager, Jeff. The new owner did not respond to a request for comment.

It is the fourth all-you-can eat buffet in four years to operate in the 10,450 square-foot space.

Some may recall it as the longtime site of an Old Country Buffet, all you can eat restaurant, which operated there approximately 20 years before abruptly closing in February of 2012 due to bankruptcy restructuring.

Prior to opening, Teppanyaki did a complete interior renovation. Osaka also did a complete upscale remodeling which remains in place including a waterfall fixture and Foo Dog statues at the entrance.

The manager said menu items served at Grill and Buffet are pretty much the same as before except that crab legs are now sold by the pound instead of all-you-can-eat. Food waste was a problem for previous owners, he said.

Also new is a liquor license allowing the business to offer customers a full bar including beer, wine and cocktails by the glass.

Jeff said they are still hiring wait staff and that business is steadily improving. Operating hours are 11 a.m. to 10 p.m. Monday through Saturday and 11 a.m. to 9 p.m. on Sunday.