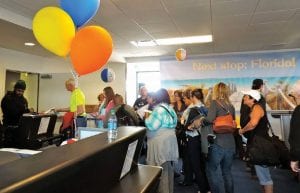 Top, a small plane towing a banner circled Bishop Airport for two hours during the launch party for Allegiant Airlines. Surrounded by balloons and other festive décor, final passengers board Allegiant’s first flight from Bishop Airport.

FLINT TWP. — April 13 was a banner day for Bishop International Airport in more ways than one. Not only did a small plane circle the airport for two hours towing a banner to announce the arrival of Allegiant airline but a special celebration inside the airport was held for passengers taking the inaugural non-stop flight to Florida.

With that nearly fully-booked flight, Allegiant became the fifth major airline serving the Flint market. Several local dignitaries and other special guests were on hand for a ribbon cutting and launch party. Remarks were made by Win Cooper, chairman of the Bishop Airport Authority and by Allegiant, city and county officials.

“We’re excited to land in Flint and offer the community our unique brand of low-cost travel that millions of Americans are already taking advantage of,” said Jude Bricker, Allegiant chief operating officer. “We know that local travelers have been asking for affordable nonstop flights to Orlando and St. Pete and we’re glad we can offer them right now when folks are beginning to plan their summer vacations.” 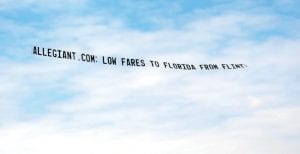 Allegiant’s arrival brought in ten new jobs for ground handlers as well as potential for more jobs to come, based on demand for services, said Darin Everett, regional manager for Saginawbased AVFlight, which is the company hired to handle Allegiant’s business at Bishop

Flint Bishop is the third busiest airport in Michigan, second only to Detroit and Grand Rapids and poised for continued growth, said Dave VanderVeen of Oakland County Central Services. Noting a long-standing supportive relationship between Oakland County and Bishop, VanderVeen mentioned that an I-75 widening and automation project set to begin this summer will benefit Bishop by making travel into Genesee County even faster and more convenient for flyers.

County Commissioner Brenda Clack and her husband Floyd, a retired state representative, were among Allegiant’s first passengers. Clack said that when her husband booked the surprise weekend getaway for her, they did not realize that it was the very first flight. Kathy King of East Tawas who travels to Florida frequently to visit her son, said he did not know it was the first flight when he booked her ticket. Having Allegiant at Bishop is more convenient than having to go to Lansing to catch a plane, she said, adding that she told her son the Flint service now also gives him no excuse not to visit her in Michigan more frequently.

Myers of Allegiant also marked the first flight with a special surprise announcement. He introduced Connor Willmeth, 5, of Davison, a special needs child who was invited by Allegiant’s president to watch the plane take off. Accompanied by his mother Jillian and sister Chelsea, Connor. who is wheelchair bound, had a front-row seat on the tarmac to watch the plane roll through a water cannon salute before takeoff.

Myers announced that Connor and his family will receive an all-expenses vacation at a time of their choosing this summer, Myers said. (For more details about this amazing little boy and the battle he has fought most of his life against Sturge-Weber Syndrome, see his Facebook page at www.facebook.com/connorandSWS)

The departing airplane was showered with a water cannon salute as it headed to the runway.