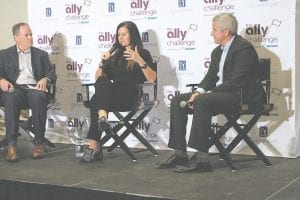 Chosen were United Way of Genesee County (UWGC), and Genesee County Habitat for Humanity (GCHH), the latter of which says they will focus their outreach for those funds on their Owner-Occupied Repair Program to help keep people in their homes. United Way intends to focus on improving financial literacy, housing and employment services within the greater Genesee County area.

Tournament Director Chris Coffman explained that last year they really had no idea what kind of financial impact bringing the event would have on the community and told Brimmer she might expect $500,000. Brimmer joked about that at the press conference, saying she told them at the time that wasn’t acceptable.

All told, officials at the conference were able to contribute more than $800,000 which far exceeded expectations. Coffman credited Brimmer with being a primary impetus in bringing the pro-golf event to Warwick Hills. Brimmer said the area has become near and dear to the heart of the organization, which is a digital-only financial organization who doesn’t have actual bank locations.

Speaking of the resurgence of parts of Flint, Brimmer said, “The focus is on the future. The focus is on optimism, and the excitement and the path forward and not on the past; and the Ally Challenge is hopefully a big part of that path forward.”

Brimmer explained they have a huge mission to align with things which reflect their purpose and working with the tournament is a win-win for them in that aspect, as well as their mission of supporting the local community.

Monahan said last year’s fundraising total was the second largest charitable accomplishment in the history of the PGA Tour Championship. He explained they are what is known as a 501C6 charitable organization and all the players are both members and independent contractors.

The net proceeds of all tournaments go back to charity, he said as they have no owners or investors. He added that personalizing their giving within each community who hosts their events is part of what they do, and something they see as a responsibility.

“It’s a really simple business,” Monahan added. “The more good you can do in the communities where you play, the better the events in the community will be and it’s served the organization really well.”

Birdies for Charity is a grassroots extension of tour which also impacts smaller non-profit organizations locally such as the FISH Food Pantry and the Grand Blanc Community Schools (GBS).

“We are once again excited to partner with the folks from the Ally Challenge to bring professional golf to Grand Blanc. In support of those efforts, Friday, September 13th will be our Community Partnership Day. School will not be in session on this date. The Grand Blanc Athletic Foundation will once again be coordinating the parking of vehicles for spectators during the tournament. Their efforts directly benefit the student athletes in our district.”

The second-year PGA TOUR Champions event will be contested Sept. 9-15 at Warwick Hills Golf and Country Club. More information on the tournament can be found at https:// theallychallenge.com/.