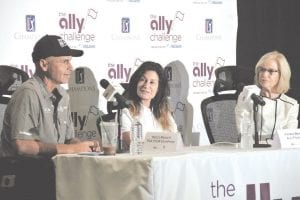 GRAND BLANC TWP. — With only 21 days until the Professional Golf Association returns to the community with its Champions Tour, representatives held an introductory session for local dignitaries and members of the press on Aug. 20 at Warwick Hills Golf and Country Club.

Although excitement is high among fans of the sport, residents who aren’t might be wondering what the fuss is all about. First of all, the tournament will bring in money for the local school district with the Grand Blanc Athletic Foundation coordinating parking Sept. 14-16 at the high school and Cook/ Mason Elementary.

The Athletic Foundation will need a total of 285 volunteers (four hours each) those three days to assist collecting parking fees and directing cars. They are also looking for a booster leader. Details at: www.signupgenius.com/ go/60b0949a8a72ea64-gbafally. 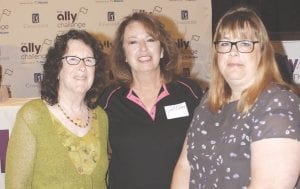 Ally Bank is sponsoring financial education ‘fun’ events featuring some of the 400 staff that Ally has volunteering. Ally will have someone reading a book they’ve published on financial literacy called “Planet Zee and the Money Tree” at Brendel Elementary. The book teaches savings concepts.

There will also be a financial literacy concert held at the high school. Tickets for the whole day on Friday, the first round of play, are $55 and include two concerts, the opening act being Count’s 77 — a hard rock band from Las Vegas — formed by Danny “The Count” Koker, titular star of Counting Cars, the History Channel spinoff of Pawn Stars. The band focuses on the rock genre of the 1970s.

Following that, Big & Rich, a country duo will take the stage. Coffman noted active duty and retired military will receive free admission to tournament events and the 18th hole will have a Veteran’s Hospitality tent sponsored by Dow Chemical. Additionally, there will be a Fan Zone featuring special surprises and fee-free ATM’s throughout the course.

“I can’t tell you how excited we are for the Ally Challenge,” Brimmer said. “It’s unbelievable to be back in this community, at this amazing course.” She added the response from the Flint and Grand Blanc community has been overwhelming and she is thrilled to work for an organization which believes in giving back to the community.

Brimmer explained a big part of the reason they wanted to bring pro golf back was the economic impact to the community, which has been estimated at over $20 million.

“Equally important to me is the kind of life I’ve seen breathed into this community knowing that professional golf is going to be back here at Warwick and back here at Grand Blanc,” she said. Brimmer said they know the struggles the Flint area has faced and wanted to make sure the funds raised stayed in the local area.

A new addition is the Birdies for Charity program which will raise money for any 501c non-profit in the county. A birdie is a score of 1-under par (average score) on any individual golf hole. Ally will match six percent of the money raised in the program.

McLaren Health Care’s Laurie Prochazka said they are very excited to sponsor the event, which is being held in the same town as their corporate headquarters, which located here last year.

Prochazka added they have seen an overall high level of positive energy and enthusiasm generated throughout the state by bringing an event of this caliber back to mid-Michigan.

“Community focus has always been a real key part of McLaren’s mission,” Prochazka added. “We’re very, very committed as a corporate citizen and community advocate to sponsor programs and activities that enhance the quality of life for residents as well as provide added health and fitness.”

McLaren will host a Health and Wellness pavilion, which will feature not only information about health services, but a walking contest and other activities. Warwick hosted the Buick Open for 50 years until 2009.

Rocco Mediate, who won the Buick Open in 2000, said he and other players are thrilled to be coming back to Warwick. He summed up the theme of the day, saying, “I don’t know of any other sport that brings together community and charity like professional golf.”

Another charity which will benefit is Grand Blanc’s own McKenna’s Squad Beauty Bar Box, which will emulate the beauty bar experience for all kids. Details on all other events can be found at theallychallenge.com/tournament-info/ schedule/.