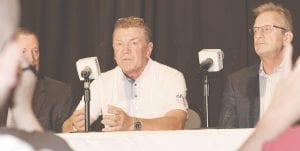 GRAND BLANC TWP. – The PGA Tour Champions hosted its annual Media Day Tuesday morning at Warwick Hills Golf and Country Club. Now in its second year, the Ally Challenge brought back its inaugural tournament champ, Paul Broadhurst, fresh off a plane from London, England. Broadhurst said it was important to attend the Media Day as the defending champ to give back to the thousands of people that came out to watch the Champions tour golfers last September. The tournament has been moved to Sept. 9-15 this year. Also speaking at Media Day were Ally Challenge tournament director Chris Coffman, Jeff Cumberworth, Senior Marketing Director, Ally Financial and Gregory Lane, Executive Vice President, Chief Administration Officer, McLaren Health Care. Broadhurst said the Ally Challenge, and the Buick Open when it was at Warwick Hills, was one of the players’ favorites. “It’s quite a European-type course and the tournament is one of our favorites,” said Broadhurst. “Many of us played back when the Buick Open was here and the guys are all looking forward to playing again this year.” Broadhurst, 53, said he hopes to play until about 60, then will focus on doing more things with his family. “That’s with my wife’s approval, of course,” he joked as he sought her out in the audience. See our related story on Page 7, with tournament dates, the announcement of the fourth celebrity to play in the new 9-hole Charity Scramble and other details.