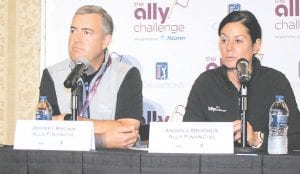 HNS Sports Group will continue to manage the event and a press release issued indicated next year’s tournament will tentatively occur July 27-Aug. 2, 2020. A Saturday press conference featured former professional golfer Jack Nicklaus who said he was thrilled to participate in this years’ event and flattered to be what many consider the ‘elder statesman’ of professional golf.

He reminisced about his first time at Warwick in 1965 and said even though he didn’t win at that event, he did buy his first car during it and said it was a 1957 Buick Special convertible and also asked and received an explanation about how the Buick cars got their name 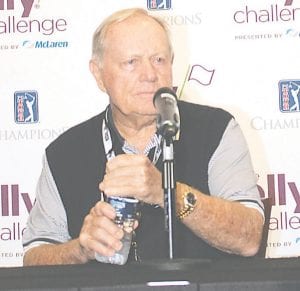 Jack Nicklaus, “The greatest man that ever played the game,” per Ally Financial CEO Jeffrey Brown, answered questions on Sept. 14.

He explained he had developed a friendship with Bob Ritchie, aka Kid Rock and announced his selection of the music performer as his partner in the celebrity golf challenge later that afternoon.

“We are excited to announce today’s extension of The Ally Challenge presented by McLaren,” said Miller Brady, President, PGA TOUR Champions. “The PGA TOUR has a tremendous history with Warwick Hills Golf & Country Club, and it has been amazing to see our players reconnect with the Grand Blanc community since returning in 2018. This has quickly become one of the premier events on PGA TOUR Champions, and we are eager to continue working with HNS Sports Group, Ally, McLaren and all of our tournament partners to continue building on the strong foundation in place.”

“We are thrilled that this tournament will continue to be played in Grand Blanc at Warwick Hills,” said Chris Coffman, tournament director of The Ally Challenge presented by McLaren. I would also like to extend our gratitude to the membership at Warwick Hills, not only for continuing to serve as our host, but also for their tremendous engagement with the event. The impact this tournament has generated doesn’t happen without their backing and the support and strong foundation provided by the PGA TOUR.”