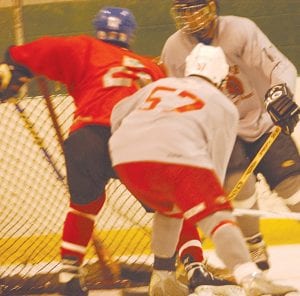 The classes of the 1970s and the 1980s battled it out for the inaugural win at the Ainsworth High alumni hockey game at Flint Iceland Arenas last Friday.

“A hockey game took place, but there was a whole lot more going on around it.

“This is the one and only time the game has happened,” Stone noted.

Over last weekend, the all Ainsworth High reunion that included the classes of 1961-1986 came out to participate. Stone said that a few people got together and former players who played for him put this alumni game together, in honor of his youngest brother, Rob, a 1981 grad, who played three years at Ainsworth.

“It’s been quite a journey,” Stone explained. “Rob had an autoimmune disease Scleroderma and passed away in March 2006 at 43 years of age, in his prime. It’s just a horrible thing and I wouldn’t wish it on anyone.”

Full credit for organizing the game goes to David Hayes, a goaltender for four seasons under Stone when Rob was a freshman. He arranged this for the alumni squads and asked Tim and his older brother, Jeff, to coach both teams.

“This was a really neat thing for us to be part of,” Stone continued. “They had this game and charged $5 and had raffles. My daughter-in-law works for a radio station and all money goes to Paula and Ben and Joe, Rob’s family. They took the money and donated it to the Brad Stone Achievement Scholarship.”

Adding to the blow the family had already suffered, Brad Stone was lost in 2000 after suffering an asthma attack as a 12-year old. Since then, Ben has been doing golf outings and other fundraisers in his name.

“They just had the 10th annual at Fenton Farms in June,” Stone noted. “Scholarships are given out to Lake Fenton students and to Eastern Mich. Hockey Association athletes. All monies are given to the Brad Stone Scholarships, pretty big ones worth several thousand dollars.”

“We’ve kept it going to honor both Rob and Brad,” Stone said. “There’s a hockey tournament every fall at Iceland, the Brad Stone Fall Classic, and hundreds of kids have taken part. The Rob Stone MVP award is handed out and at the end of the day the Community Foundation of Flint manages the fund and we give out scholarships.”

Stone, a 1973 Ainsworth grad, saw his kids graduate from the newer Carman-Ainsworth after the last graduating class from Ainsworth shut the doors in 1986. He coached high school hockey for 29 years in Flint, but now spends time with the grandkids. Stone noted that on the 70s alumni squad, Jeff’s other son, Jake, 15, filled in a vacant roster spot and his own son Ryan, 30, played wearing jersey No. 11, Rob’s number when he played hockey in honor of his uncle.

“The 1980s team won this time around, 7-5, or something close to that,” Stone said. “It was a quick start, but then it stalled. It was great to see all the players and we will have to see if the tournament makes it long term.”

Although the overall tally isn’t known yet, Stone noted that it was a pretty fair amount of money with a packed arena full of family and friends. Hayes, Michelle Howard and others paid for the ice time and donated a lot of time to get the puck sliding for this event.

As he said earlier, though, it was about more than hockey for Stone and his family members: “Everyone taking their losses and turning them into positives, I just have a lot of admiration for what we and they have done with some pretty bad times. It has been some really neat experiences for all of us.”