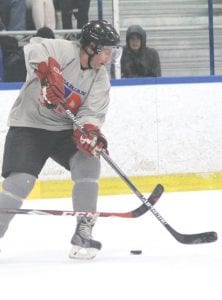 A Carman-Ainsworth 40-and-over player works the puck during Friday play. No player numbers were included on the roster.

LAPEER – The annual high school hockey alumni tournament has grown over the years, and this year it was bigger than ever. Aside from the already established 18-and-up and 30-and-up divisions, the tournament expanded to a 40-and-up division, leading to the crowning of three separate champions, as well as the addition of new schools.

“It is one of the best weekends for former high school players coming back and battling for their school’s honor,” said Bryan Byarski, a 40-andup player for Grand Blanc, as well as the varsity hockey coach at his alma mater. “We had players coming back from Colorado, Traverse City, and Grand Haven. It’s great seeing guys from other schools that you grew up playing with as youths and then playing against in high school. The bonds you develop with these guys never break and it makes for an amazing weekend. Although we are all sore and tired, we wouldn’t miss it.”

The 40-and-up division included some of the previously mentioned schools, but also opened the door for a few schools that haven’t had hockey programs in a while. The division included Bentley, Carman-Ainsworth, Davison, Flint Central, Flint Northern, Grand Blanc, Kearsley, Flint Powers Catholic and Swartz Creek.

Davison claimed the 18-and-up championship, Kearsley took the 30-and-up crown and for the new 40-and-up division, its first title went to Grand Blanc. The majority of the event was held at the Polar Palace in Lapeer, but because of the massive growth of the tournament, several games were also held at Crystal Fieldhouse in Burton from Friday through Sunday, combining for 58 games.

To take the first-ever 40-and-up championship, Grand Blanc skated by Davison in the title game, 5-1.

The tournament began in 2011 with a one-division format, but has since taken on a life of its own.

It’s not just a hockey tournament, though. It’s also a fundraiser with proceeds benefitting the Old News Boys of Flint and MI Youth Hockey Scholarship Fund. Players this year donated to a coat drive with every player required to donate at least two coats.

For more information, visit highschoolhockeyalumni.com or the High School Hockey Alumni Tournament Facebook page. Plenty of team photos are posted along with comments from alumni players.