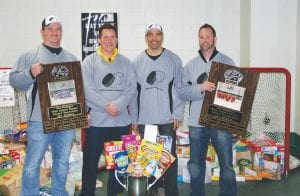 LAPEER — For the last four years, alumni of area high schools have gotten together to battle it out for the pride of their respective alma maters, and for the second straight year, the squads will battle it out at the Polar Palace Arena with a large slate of games taking place from April 11-13.

After the first two years at Ice Mountain Arena in Burton, the tournament moved to Lapeer following Ice Mountain’s closure. The tourney continues to grow by several schools each year in both age brackets.

“This tournament will feature 23 teams representing 13 schools from throughout Genesee, Lapeer and Oakland counties,” said Rico Phillips, one of the organizers of the tournament and a player for the Flint Southwestern alumni team. “They are comprised of players in two age brackets; 18-and-over and 30-and-over.

“Our area has been enriched with quality high school hockey and the tournament will be a clear display of that by culminating over 330 former high school hockey players who are playing for the pride of their alma maters. The competition is intense and entertaining. The atmosphere is endearing as there is a homecoming feel to the gathering.”

Not only do all of the local alumni get together to go headto head on the ice, but the event also supports good causes, as well.

“This event is equally as important a fundraiser for the Food Bank of Eastern Michigan as well as the Michigan Youth Hockey Scholarship Fund,” continued Phillips. “We are asking spectators to offer a donation of cash at the door or a box of cereal instead. Proceeds from the team entry fees also contribute to the funds.”

The festivities begin on April 11 at 5 p.m. with a contest between Swartz Creek and Fenton. Games will continue throughout the weekend and conclude with the 18-and-over championship at 4:30 p.m. on April 13.