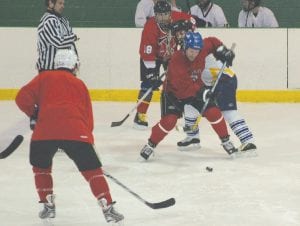 Carman-Ainsworth wins a neutral zone faceoff on Saturday at Iceland Arena in Flint.

FLINT— For the past couple of years, local Alumni Hockey tournaments in our area have seen quite a bit of success at both Iceland and Ice Mountain Arenas. This past weekend, the initial tournament took place at Iceland, drawing several local hockey enthusiasts to come out and enjoy the action. Not to mention, root for their alma maters.

The Alumni tournaments have drawn an eye-popping amount of spectators to our local rinks, and if this momentum continues, these tournaments will be here to stay for a long time. The Iceland tournament began on Friday and concluded with the championship contest on Sunday.

The teams participating can sometimes vary depending on the interest of former players, but the fans often show up in reasonable numbers. Teams that competed this past weekend included Linden, Clio, Carman- Ainsworth, Davison, Flint Powers Catholic and Flushing.

Normally in these competitions, it isn’t always easy to get similar uniforms for each player on the team. They may not still have their high school jersey, and it can be costly to have new ones made in such a short time period. However, some teams are quite good at coming up with similar uniforms on such short notice. In fact, Carman- Ainsworth took an interesting approach to the idea.

The Carman-Ainsworth goalie stands tall against Davison last Saturday during the alumni tournament.

Several fans were instantly confused as they walked into the rink, assuming they were about to watch the match up between the Cavaliers and Davison. However, when they walked in, they saw the Cardinals in their normal maroon and gold, but the team at the other end of the ice was dressed in red from head to toe. As it turns out, the Carman- Ainsworth alumni hockey squad got together and decided they were going to wear throwbacks.

No, not an older version of the Cavaliers uniforms, but a testament to the days when Carman and Ainsworth were two separate schools. The all red digs were a dedication to the defunct Ainsworth Spartans, and under the classic moniker, Ainsworth fought its way to the championship game of the alumni tournament. However, it was not able to hold on in the tournament finale, as it was topped by longtime rival Flint Powers Catholic, 3-1.