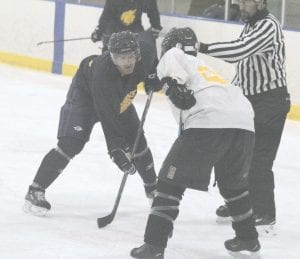 LAPEER – The annual Mid- Michigan High School Hockey Alumni Tournament returns for the ninth year, taking place Apr. 26-28 at the Polar Palace in Lapeer, as well as Crystal Fieldhouse in Burton. The tourney will be the final event at the Polar Palace.

The tournament will consist of 35 teams representing 18 different high schools from the counties of Genesee and Lapeer. Three different age brackets make up the tournament with 18-and-over, 30-and-over and 40-andover.

“Our area has been enriched with quality high school hockey and our tournament will be a clear display of that by culminating over 350 former high school hockey players who are playing for the pride of their alma maters,” read a press release from Rico Phillips, one of the tournament’s directors. “The competition is intense yet entertaining. The atmosphere is endearing as there is a homecoming feel to the gathering. There are former all-conference and all-state players that intend on playing. Also, some players will be traveling in from all over the United States to attend this tournament.

“This event is also serves as an important fundraiser for the Flint Old Newsboys. We are asking spectators to offer a donation of cash of their liking at the door or coloring books and crayons or backpack instead. Proceeds from the team entry fees also contribute to the Michigan Youth Hockey Scholarship fund which puts money into youth hockey associations in both Genesee and Lapeer counties. This event has raised well over $25,000.00 for the various charities and was also a key sponsor of the 2019 Flint Inner City Youth Hockey Program which gave children that reside within the City of Flint the opportunity to learn the sport absolutely free.”

Lapeer East and West will clash at 5:45 p.m. in the 30-and-over bracket and then at 7 p.m. in the 18-and-over division on Saturday night at the Polar Palace.