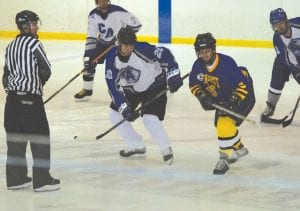 LAPEER — It’s a tournament that’s typically been held at Burton’s Ice Mountain Arena. However, with the closure of Ice Mountain last season, the annual alumni hockey tournament needed more stability out of its venue, electing to sign a contract with the Polar Palace to secure the tournament at the arena for the next couple of years.

“We changed the venue with the closing of Ice Mountain over the last year, or since we last had a tournament, so we had two options; Flint Iceland Arena and the Polar Palace. So we selected through a big process,” said Rico Phillips, one of the tournament’s organizers. “(Polar Palace) is unique in the fact that it has a restaurant attached to the arena and it offers more for our spectators and participants.

“With downtime between games, you may want some place to go and it’s all right there and we’re excited that we have a facility that can offer that to us. We decided that we would insert a contract with the Polar Palace for them being the host venue for at least a couple of seasons. We just wanted to make sure we took a good look at one venue.”

This will be the third annual alumni tournament held by the current committee, with each of the first two occurring at Ice Mountain. A separate tournament was held this weekend at Iceland. Each tourney typically draws well, and Phillips hopes that is especially the case in Lapeer.

“Well, what we look for and what we’ve noticed, is obviously the hockey family community, which is typically players’ families, that number swells pretty good based on the number of players,” added Phillips. “We hope for people to come out because it’s a fundraiser for the Food Bank of Eastern Michigan. You’re looking at a group of very experienced players who play in leagues around the area. We’re hoping to have decent crowds, but we never calculate the actual number.”

As Phillips mentioned, the tournament will be used to help raise funds for the Food Bank of Eastern Michigan, but in a different way than most fundraisers take place.

“One of the unique things, in lieu of a donation, is to actually bring a box of cereal. When we partnered with the Food Bank, we asked for something more specific that we can give,” continued Phillips. “The idea was making sure we did something unique, which was to ask for a box of cereal, which for us is asking a lot more than asking for cash. We just wanted to make sure that we contribute and each team has to have a minimum of five boxes of cereal to donate.”

The Food Bank of Eastern Michigan, however, is not the only fundraiser taking place during the weekend tournament. The tourney will also help youth hockey players realize their dream of playing at higher levels.

“We also have a second fundraiser for the Mid-Michigan Youth Hockey Scholarship fund,” stated Phillips. “What this fund is for is in the future we would like to help financially provide hockey and equipment for youth leagues. That’s how we got our start, so the best thing we can do is to help fund it so other kids can enjoy hockey.”

The puck drops on the tournament on Friday, April 26 at 5 p.m., beginning with a 30-and-over matchup between Kearsley and Flint Powers Catholic. Lapeer East’s 18- and-over team will be on the ice at 5:15 p.m. that night, battling with Goodrich. The marquee matchup for locals, however, is the 18-andover faceoff between Lapeer East and Lapeer West at 7:15 p.m. on Saturday. The festivities conclude on Sunday with the 18-and-over championship at 3 p.m. and the 30- and-over title game at 4:30 p.m.