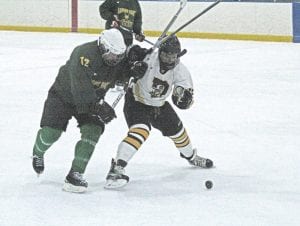 LAPEER – What started in 2011 and has grown ever since, the annual Mid-Michigan High School Hockey Alumni Tournament, will be held on April 21, 22 and 23 at the Polar Palace of Lapeer and Crystal Fieldhouse in Burton. The tournament has returned for the seventh consecutive year and is getting bigger than ever. In fact, it’s gotten so big that it has made scheduling the event a tougher task than usual.

“It has not been actually finalized yet. We’re about 90 percent there,” said Rico Phillips, one of the tournament’s directors. “As I look at the master schedule, we’re going to be splitting because we’ve grown into three divisions.”

In the past, the tournament was only split into two divisions of 18-and-over and 30-and-over. This year brings the introduction of the 40-and-over division.

“Believe it or not, it was from demand. Some of the guys that play in a league every week are mostly in the 40-and-over division and that’s kind of the director’s peer group,” added Phillips. “So, as you see, over these seven years we went from this 30-and-over to now we’re getting older.

“We did have very good exposure and because of it there was a lot of interest from a lot of former high school hockey players but they were a little bit older and they didn’t want to play 30-and-over because basically they were coming off the couch to play in this tournament as oppose to regular league players.”

A new age division isn’t the only addition to the tournament. It seems each year enough interest grows that a new school is added to the festivities, and this year is no different.

“One that will definitely interest your audience is the Bentley Bulldogs are bringing in a 40-and-over team,” Phillips said. “That’s our biggest add-on right now. The Mt. Morris Panthers came in a year ago and they’re returning.”

Although the match-ups haven’t been set in stone, the timeline for the event has.

“Starting on Friday, the first game is scheduled for 5 p.m. at Crystal Fieldhouse and also in Lapeer they will begin at 5:15 p.m.,” stated Phillips. “The last game on Friday will be at 9:30 at Crystal Fieldhouse. Then we’re going to go right back at it very similarly on Saturday starting at 8:30 a.m.”

The tournament usually works hand-in-hand with charities or fundraisers for good causes and this year they’re getting quite a bit of participation from their particular fundraiser.

“We’re going back with the Old Newsboys (of Flint). One of the things we appreciate when we participate with fund raising is that the group that we’re raising funds for engages with us and kind of comes out and represents themselves,” said Phillips. “Old Newsboys goes above and beyond, so that’s why we’re back with them. Plus, it’s for a good cause, too. Each team brings two coats as part of the donation. The teams participate by the tournament fee, as well as giving a bit of a donation.”

Phillips, who plays in the tournament for his alma mater, Flint Southwestern, wants to get rid of any perceptions about the quality of hockey on the ice.

“This isn’t just beer league hockey,” he added. “The guys put on those jerseys and they’re representing their schools. We’re old guys with young hearts; there’s no question about it.”