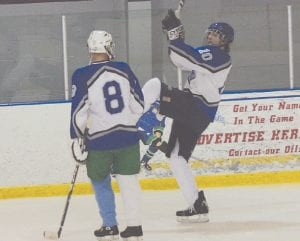 BURTON — Last spring, Ice Mountain Arena in Burton and Flint’s Iceland Arena held alumni hockey tournaments, which drew surprisingly well. There was a great deal of interest from former players, and the spectators showed up in much bigger figures than expected.

As big as last year’s tournament became, this year has the potential to be even bigger.

That goal may seem lofty, but at this point, it’s very reachable if 21 teams have already been registered.

The festivities will be held at Ice Mountain on April 20, 21 and 22. The three-day event is expected to bring in some impressive attendance figures. “Last year we had 12 teams total, and we had around 10,000 spectators throughout the three-day tournament,” added Lemieux. “(It was) very successful; Bigger than I could ever imagine.”

With the success of last year’s 12-team bracket, which has nearly doubled in teams this year, who knows how big the tournament will be in the future.

“This will be an ongoing tourney for years to come,” concluded Lemieux. “Next year I will probably need two arenas.”

A month prior, a similar tournament will be held at Flint Iceland Arenas from March 23-25, also in its second year. As in the Ice Mountain tournament, there will be two divisions comprised of 18-and-up and 30-and-up. Each team will be guaranteed three games, and championship T-shirts will be awarded to the winning team.

Period lengths will last 13 minutes until the third and final period, which will be a 14-minute frame.

It costs $100 for team registration, with the money going back to the schools’ current hockey program or athletic department.