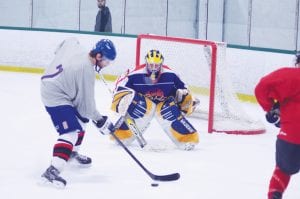 Carman-Ainsworth’s Justin McCarthy gathers in a loose puck in the slot during their game with Swartz Creek Friday.

LAPEER — Since 2011, the annual high school hockey alumni tournament has been a huge success. Originally at Burton’s Ice Mountain Arena, the tournament made the move to Lapeer’s Polar Palace last year and seems to have found its home. A few overflow games, however, were scheduled for Burton’s newly re-opened Crystal Fieldhouse, the former Ice Mountain Complex.

The fifth annual event was once again benefiting a charitable organization with The Food Bank of Eastern Michigan and the Michigan Youth Hockey Scholarship Fund receiving the tournament’s proceeds.

The tournament expanded a bit this year, adding a few schools that hadn’t competed in years past. The tournament, in itself, was split into two different divisions — 18-and-up and 30-andup. Each team was guaranteed three games before the top four seeds in each age group moved on to a single-loss elimination playoff.

It took 44 games and four sheets of ice to complete the tournament, but it concluded in thrilling fashion. The 18-and-up semifinals began with Powers narrowly escaping Goodrich, 3-2, and Davison cruised into the final with a 6-1 victory over Swartz Creek. The Cardinals and Chargers would go back and forth in the championship game, but Davison dethroned last year’s champions with a 5-3 triumph.

Defending 30-and-up champion Powers skated past Carman-Ainsworth in the semifinals while Kearsley posted a 7-3 victory over Davison to set up a championship game of two former Big Nine rivals. Like last year, though, Powers was victorious again, but it didn’t come easy by any means in a tightly knit 5-4 win over the Hornets.

As in the past, the tournament drew an abundance of spectators at both the Polar Palace and Crystal Fieldhouse, and even reignited a few rivalries that have disappeared over the years. Crosstown rivalries such as Lapeer East- Lapeer West and Flint Central-Flint Southwestern were resurrected, as well as several Big Nine rivalries.

According to Rico Phillips, one of the tournaments directors, they’re always looking to expand to more teams, but in the future, it may be a necessity. In 1990, there were 23 high school hockey programs in Genesee and Lapeer counties, however, today that number has dwindled down to less than 10, with only Lapeer, Davison, Powers, Grand Blanc and Flushing holding their own programs and the rest being co-ops.

With so many programs pushed to the side, eventually it will be tough to find a full roster of guys who actually played for a particular school, thus Phillips and the entire board of directors are keeping their eyes and ears open for schools outside of the Flint-area that would be interested in being a part of the successful annual event. One thing is for sure; there doesn’t seem to be any shortage of interest or participation.