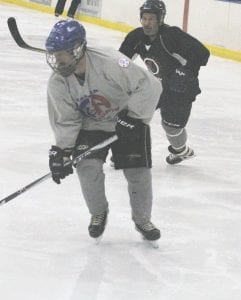 LAPEER – The final event at the Polar Palace brought thousands out to the arena throughout the weekend as the ninth annual Mid-Michigan High School Hockey Alumni Tournament took to the ice. There were also several games played at Burton’s Crystal Fieldhouse.

The tournament also renewed old rivalries that are no long around, such as Lapeer East and West and Flint Central and Northern.

Each team played three games, and the top four seeds remaining in each age bracket move on to a single loss elimination semifinal. The championship games have been dubbed the Mullet Cup, with all three finals at the Polar Palace.

The Polar Palace has been the main arena for the tournament for the past several years, with some spillover games going to Crystal Fieldhouse as the number of teams has expanded greatly. There will obviously be some changes coming to next season’s tournament.

According to tournament director Rico Phillips, the organizers of the tournament are considering a myriad of options. Iceland Arena remains an option, although they currently maintain only one sheet of ice and the Dort Federal Event Center doesn’t keep the ice down during the Flint Firebirds’ offseason.

There is also the possibility that they keep all of the games at Crystal Fieldhouse and just expand the schedule to begin on Thursday. No official decision has been announced.