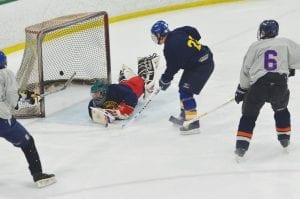 LAPEER — From the opening contest on Friday night until the championship games on Sunday afternoon, the Polar Palace Arena in Lapeer was swarming with local players and fans for the fourth annual Alumni Hockey Tournament. The event is also used as a platform to raise money for the Food Bank of Eastern Michigan, as well as the Michigan Youth Hockey Scholarship Fund.

The tournament relocated to Lapeer last year after the closure of Ice Mountain in Burton, and has been quite successful since the move. This year’s tournament involved 23 teams representing 13 high schools in two different age groups.

“Our area has been enriched with quality high school hockey and the tournament (was) a clear display of that by culminating over 330 former high school hockey players who are playing for the pride of their alma maters,” said Rico Phillips, tournament organizer and player for the Flint Southwestern alumni team. “The competition is intense and entertaining. The atmosphere is endearing as there is a homecoming feel to the gathering.” 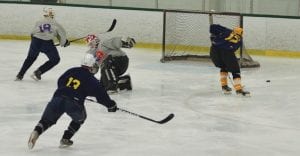 Cavs netminder Matt Weder (#1) gets caught out of position by Lapeer West last Friday at the Polar Palace in Lapeer.

The festivities began on Friday night with Swartz Creek knocking off Fenton, 10-5, in the 18-and-up division.

Kearsley began its play on Friday in the 18-andup division and narrowly fell to Goodrich, 3-2. The 30-and-up team, however, dominated in its opener with a 4-1 win over Flint Powers.

Both brackets were won, however, by Flint Powers Catholic, knocking off Swartz Creek, 9-1, in the 18-and-up tourney while the 30-and-up bracket saw Powers top Flushing, 4-3, in the title game.