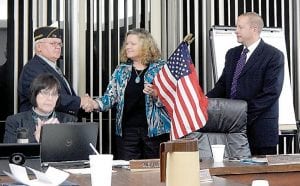 FLINT TWP. — Carman-Ainsworth Schools along with districts statewide have been required by law to display a flag in each classroom since a mandate was approved by the state legislature and signed by the Governor about a year ago.

C-A is in compliance thanks to support from the American Legion of Michigan which has taken up the cause of donating flags to schools.

“Many districts including ours did not have an American flag in every classroom,” said C-A Superintendent Steve Tunnicliff. “Statewide the American Legion stepped to the plate and said we will do our best to ensure that every classroom has them.”

The presence of the flag allows, but does not require, students to recite the Pledge of Allegiance daily at school.

The Legion has supported the law since its introduction in September 2011 by Sen. Roger Kahn (R), but also did not want to place an extra financial burden on schools, Williams said.

“It is very important that a flag fly in every classroom,” Williams said. “That flag represents something to us as legionnaires and veterans.”

Donating classroom flags is one of many American Legion programs to help youth, he said, adding that helping youth is one of the four pillars of the American Legion. Boys State, Girls State and Student Trooper are among those programs,

Cool added that there are annual scholarships too and encouraged the board to spread the word to students and encourage them to apply.

Williams also said that the Legion, same as many school districts, are preparing to help the future children of veterans.

“It is estimated that in the next five years our state will experience a growth in young veterans returning from Iraq and Afghanistan,” Williams said. “We are already setting up programs for the children of those vets.”

Most people in a community are well aware of all the Legion does, he said.

“It is not just a bunch of old guys getting together at the local bar.”