ARE TEARING UP THE SALES ROADS

A recent study by Experian Automotive reveals the resurgence of the American muscle car – six high-performance models that were born in the United States, said Experian spokeswoman Roslyn Whitehurst.

According to the study, new registrations of American muscle increased 35.4 percent over the previous nine years.

In terms of registration volume, the Ford Mustang took the top spot (77,000 new registrations), followed by the Chevrolet Camaro (66,000), the Dodge Charger (55,000), the Dodge Challenger (50,000), the Chevrolet Corvette (32,000) and the Dodge Viper (1,000). “The love of the Mustang combined with the reintroduction of the Camaro, Challenger and Charger has sparked a resurgence of the muscle car,” said Brad Smith, Experian’s director of automotive statistics.

“While the growing popularity might run contrary to conventional wisdom, consumers are continuing to show their appreciation for a part of American history and not steering away from raw horsepower to focus solely on fuel efficiency.”

Purchasing patterns of American muscle cars also are interesting, Smith said. The study found that consumers who purchased a Corvette or a Viper were more likely to pay in cash than those buying one of the other four models.

As many as 40.3 percent of Corvette and 34.5 percent of Viper buyers paid with cash, which is a 101.8 percent increase over the next highest model.

In terms of leasing, the Charger was leased most often, with 12.3 percent of consumers choosing that financing option – a full 64 percent increase over the next model reviewed in the study.

“With the Viper and the Corvette being on the higher end of the muscle cars reviewed, it’s not that surprising that a higher percentage of consumers paid for them in cash,” said Melinda Zabritski, Experian senior director of automotive finance.

“Our findings show that those buyers had the highest credit scores (with the average a full 26 points higher than the other models), which could indicate that they have more disposable income.” 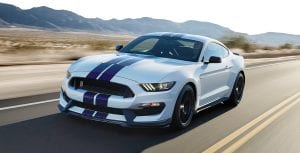