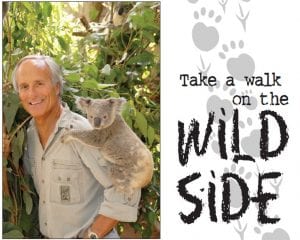 FLINT
— Audiences ages 3-100 are invited to take a walk on the wild side when America’s favorite animal ambassador, Jack Hanna, visits The Whiting for a one-day only show 3 p.m. Oct. 10 as part of his Jack
Hanna’s Into the Wild Live
tour. His stop at The Whiting is just one of the approximately 100 shows Hanna does each year.

“I love doing it,” Hanna said in a phone interview.

Hanna’s love for animals began at an early age. He began working for his family veterinarian at the age of 11, spending most of his time cleaning cages. He attended Muskingum College in New Concord, Ohio, graduating with a bachelor of arts degree. He also met his wife, Suzi Egli, at Muskingum and they married in 1968. The couple opened a pet shop in Knoxville, and remained there until Hanna received the opportunity to work first at a small zoo in Sanford, Fla., and then at the Central Florida Zoo from 1973-1975. 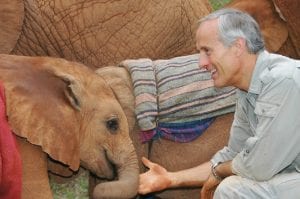 After a short break following a family illness, Hanna began his career at the Columbus Zoo in 1978

as its director. After helping the zoo revamp itself, Hanna was approached in 1983 to appear on Good Morning America
in New York

City following the birth of baby twin gorillas at the Columbus Zoo. Hanna accepted the invitation, wanting to educate the public on animals.

“I knew there was an audience that had not been reached and this would be a place for people to be educated,” Hanna said. “It’s a much different setting than going to the zoo.” After GMA,
Hanna became a regular on The
Late Show with David Letterman
and from there, he has helped educate the public through appearances on Larry
King Live, The Ellen DeGeneres Show,
Hollywood Squares, The Maury Show,
Entertainment Tonight,
FOX News and CNN. In 1992, Hanna became Director Emeritus of the Columbus Zoo and now spends most of his time traveling, exploring animals and educating the public.

With his shows, Hanna has a set routine of what happens before and during the performances.

“I do autographs before the show, and talk to the audience,” he said. “I start with a video, usually one on the mountain gorillas in Rwanda. I’ve been going there since the early ’80s. Then, I bring three-to-four animals onstage, then show another clip. Then, I bring out more animals and end with a clip.”

Known for the menagerie of animals he brings to each stop, Hanna will not disappoint audiences at The Whiting. Hanna will be bringing a cheetah, lynx, flamingo, armadillo, wallaby, python, gator, lemur, barred owl, grey fox, clouded leopard, fennec fox, palm civet, coati mundi, tortoise and macaw for audiences to enjoy and learn more about. The animals he will exhibit at The Whiting are from the Columbus Zoo. Hanna said he uses seven different zoos across the United States to supply the animals for his shows.

While he sticks with that schedule, Hanna admits that each show will feature a different video clip from his travels with most featuring Rwanda, which he considers his second home.

“I’ve been going there since 1982 and we have an orphange and school there,” Hanna said. Along with the orphanage and school, Hanna said he supports nearly 20 projects in the country.

So what’s next on Hanna’s list after his stop at The Whiting?

“We’re heading to the Amazon jungle in a few weeks for the TV series,” he said.

Hanna’s current TV series, Jack
Hanna’s Into the Wild,
is an unscripted, action-packed series that began in October 2007. The first week of his Amazon adventure, Hanna and his crew will spend on a boat, filming different animals. “There is a certain type of manatee, along with jaguars and insects. We’ll film anything that crawls,” he said. From there, he’ll head to Patagonia and then Chile.

But while South America is still several weeks away, Hanna looks forward to introducing Flint audiences to his style of animal education.

“I’m looking forward to coming and seeing everybody,” he said. “Michigan is a beautiful state. I know people will have a good time.”

Jack Hanna’s Into the Wild Live
tour is presented by Nationwide Insurance and is part of The Whiting’s 2010-2011 season.