An economic outlook for Flint/Michigan 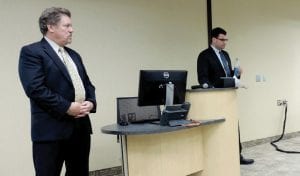 FLINT TWP. — Still rebounding from a national recession in 2009, the Michigan economy is showing overall positive direction, according to economists from the Detroit branch of the Federal Reserve Bank of Chicago.

Traub focused his talk on the national economy while Lavelle covered the Michigan economy.

Employment, housing, manufacturing and retail were among key economic areas they covered.

He said he consults with about 300 people every six to eight weeks to compile economic reports for what is called the Beige Book, a federal document that provides periodic updates on national economic conditions.

Taking to retailers is one of Lavelle’s Beige Book focuses and he has found that retailers are more willing to give temporary bonuses than permanent wage increases, he said.

Retailers reported holiday sales about the same as last year, but exceeding expectations.

Some retailers were upset because of December’s milder weather. Based on last year’s harsh winter, many retailers stocked up on snowblowers and cold weather merchandise that were slow sellers until this month.

Consumers still are getting used to lower gas prices which frees up more personal income for spending elsewhere.

Other key points Lavelle made:

• Michigan still is a leading outmigration state ranking 45 of out 50 states. Four of every 1,000 residents moved out of state in 2013. But that’s an improvement over a few years ago when Michigan had the highest outmigration of all 50 states.

• Michigan still has one of the highest unemployment rates in the nation but it used to have the highest rate.

• Flint has an unemployment rate of about 8 percent, down from a peak of 14.5 percent in 2009. A lot of that is attributable to declining labor force participation rate, meaning people who became discouraged and stopped actively looking for work.

• Since 2010, Michigan has been a consistent job creation state but before 2010 was a job loser.

• Job growth is seen in health care and education.

• Over the past ten year, jobs in Science, Technology, Engineering and Mathematics (STEM) fields have accounted for the greatest percentage of labor market growth. STEM workers also command higher wages.

• The housing market recovery has been slower.