An evening with Jeff Daniels

Actor hopes for repeat performance from the audience at The Whiting 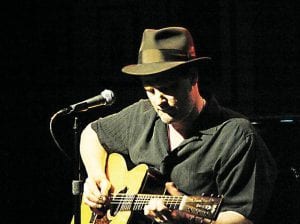 GENESEE COUNTY — Jeff Daniels may best be described as a raconteur when performing his musical stylings on stage.

Daniels, who’s starred in big screen films such as “Terms of Endearment,” “Dumb and Dumber,” and “Bloodwork,” on Broadway with a recent stint in the play “God of Carnage,” as well as productions at the Purple Rose Theater in his hometown of Chelsea, Mich. said he uses his acting chops to connect with the audience as he will attempt during a live performance Oct. 8 at The Whiting in Flint.

“As an actor, you learn how to engage an audience, you know, and it’s the script, the character, the story. Certainly with a play, and movies too, there’s a beginning, a middle and an end. You know that you’re taking them on a journey as an actor,” said Daniels during a phone interview Sept. 15 from Kenosha, Wis., where he was due to perform at the Grand Opera House the following day. 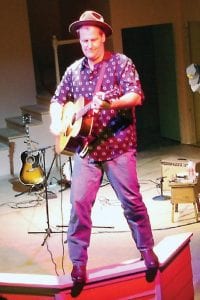 Jeff Daniels will take the stage at The Whiting Oct. 8.

“I find that part of what I do when I come out with a guitar…I start one place and we end up in another. I want to make sure as an actor, as a performer, as an entertainer, those things all kind of mesh together so that in a way from the start of the show to the end that I take them, you know, hopefully some place that they haven’t gone before. That’s it’s original, that it’s unique. That they’re laughing at things they’ve never laughed at before, that they haven’t heard, that they’ve never thought of that way,” he said. “Then you drop in the serious stuff in the middle of that and now you’re making them think of something they haven’t thought about or always knew to be true but not in that way. So, it becomes this wonderful creative challenge for me. Being an actor helps kind of illuminate that for them. It helps kind of bring the evening even more in their laps.”

Daniels said he’s had to reign in what he does on stage during acting, so as to keep that illusion in place for the audience, as opposed to when he sings during his solo performances and tries to engage the crowd.

“I did Broadway for a year and a half and the first thing I noticed — having been away from the theater for a while as an actor — was that there was this character, two things, three things (that he noticed). There’s a character that isn’t me, there’s the words I’m saying that aren’t mine, and that there’s this invisible fourth wall that we can’t broach between…there’s the play and there’s the audience,” he said. “All three of those things go out the window when I go out there with a guitar. The material is mine, there is no character, it’s me and, three, the first thing I’m doing is talking to them and then I start singing.”

In the most recent of Daniels’ four albums, titled “Live At The Purple Rose Theater”, he sets up his songs for the audience which Daniels said is used to make up a different experience for each crowd.

“Part of that is intros, part of it is you just got to set it up a little bit to let them into the song more and enjoy it more. Also, I know why they’re there. They’ve seen the movies, you know, most of them have seen the movies and they want to see me, want to hear me,” he said. “They just don’t want me to walk out and sing 15 songs with my head down, so, I give them that. I talk to them and I wing it. That’s the beauty of live performance in anything, is trying to make it special to the people in the room.”

The inspiration for Daniels’ songs range from a seedy resting spot (”Allen Parkway Inn”), to a lost man’s best friend (”My Old Dog, Fred”), or his children (”Daddy’s Little Girl”). He said when he started writing songs after purchasing a guitar in New York in 1976, “I was a writer before I even knew that I was a writer.” Daniels started penning songs, admitting the early ones “were God awful, but they were going into a notebook.”

“I think that’s just what I did, when I sat for hours and hours waiting for the phone to ring, days and weeks,” said Daniels. “That’s what I did and it kept me sane, but also I was writing. If someone had said to me in ‘78 or ‘79, are you a songwriter, I’d go God no, not at all, but I was. I was doing that and that led to the playwriting and the screenwriting and now, in the last 15 years or so, certainly 10 years of playing out in public, I’m definitely writing specifically for songs that might go into the set.”

In creating the songs he performs, Daniels said he got some early tips as a playwright that cross over the boundary into his music.

Daniels said the entire process “took a while to learn, but that’s how I approach songwriting. I really have the antenna out for phrases, or ideas, or points of view that are about some common truth that we all know, but here’s my take on it that makes it, come at you in a way that you haven’t maybe heard before. That’s what you’re looking for.”

While Daniels has poked fun at other actors for jumping into the singing world, as in his song “If William Shatner Can, I Can Too,” Daniel said with 10 years of performing on stage, he’s earned respect from musical peers and songwriters and leaves it up to the audience to make up their own minds about his performance.

“The actor, singer, songwriter thing is a battle, but it’s not my battle anymore. I mean certainly when I first came out, so to speak, 2000, 2001, started playing on stage, yeah, it’s in the room. But, it’s there to be taken seriously now,” he said. “I’ve worked so hard at it over the decades, but certainly in the last 10 years for this specific kind of show, the guitar players are going to go ‘Oh, he can play. This isn’t something he just decided to do a year and a half ago.’ And, the songwriters, I’ve had enough really positive reactions from people that are well known that have heard the songs, or some of the songs, and said you can write. So, that’s all I need. So, I can walk out and throw it at them, and those that want to take it seriously can and those that don’t never were going to in the first place.”

Daniels said he draws inspiration from Michigan for some of his lyrics, such as the song “The Michigan in Me.” In Chelsea, where Daniels founded the Purple Rose Theater, (named after “The Purple Rose of Cairo,” a 1985 Woody Allen film in which Daniels starred opposite Mia Farrow) as in other areas throughout the state he said people need to be inspired with their own surroundings. He said to build a strong arts community “it takes a community that is aware of art and that can think about it as something different than paintings hanging in a museum in New York City.”

Daniels hopes another art form, the film industry, continues to be relevant and flourish in Michigan to boost the economy. He was a strong backer of tax incentives and filmed 2001’s “Escanaba in da Moonlight” in-state. Daniels called the incentives for filmmakers a no-brainer, as long as the move brings in more money than it gives away along with helping residents.

“As Flint well knows, Michigan is desperate to create jobs. I think it (tax incentives) has brought in a lot of money, money that stays in the state. Now the problem is, you know, we’ve got a small business tax so I can see a small business owner being upset with this money going out and where’s this money coming for him. I don’t have an answer for that. I do know there are many small businesses that are benefiting from the movie money that comes in,” he said.

Despite having traveled around the world and the economic strife the state faces, Daniels has chosen to pick Michigan as the place to rest his head at night. The reason why: “It’s home.”

“It’s home and, I mean, everybody’s from somewhere. You may not like it. You may leave and never come back, but I’m one of the guys that’s never left, you know. As a friend of mine said when I was in New York for 10 years, I told him I think I’m going to move back to Michigan. He goes ‘You never left,’” Daniels said. “It’s always been home. My family’s here, my friends are here, and I never get tired of going to the Upper Peninsula. I never get tired of crossing that bridge. I consider it my bridge, and my state, and this is where I’m from and that’s it. Bottom line. Period.”

Tickets for the Oct. 8 performance at The Whiting are available by visiting www.thewhiting.com or stopping at the box office located at 1241 E. Kearsley St. For more information on tickets, residents may call 810-237- 7333 or 888-823-6837. An Evening with Jeff Daniels