‘An Evening with Jim Brickman 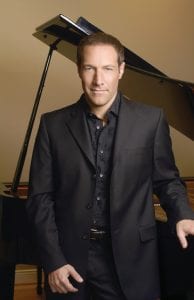 FLINT — Since revolutionizing the solo piano sound with pop-style instrumentals and star-studded vocal collaborations, Jim Brickman will bring his signature brand of sound when he comes to The Whiting Feb. 11 for ‘An Evening with Jim Brickman’ at 8 p.m.

Brickman’s signature style of romantic piano playing and songwriting has brought him six Gold and Platinum selling albums, 28 charted adult radio hits and Grammy nods in 2008 and 2009, two SESAC “Songwriter of the Year” awards, a Canadian Country Music Award and a Dove Award presented by the Gospel Music Association.

A native of Cleveland, Ohio, Brickman began playing piano at the age of 5 and studied music at the prestigious Cleveland Institute of Music. He founded his own advertising music company in 1980, writing commercial jingles for such advertisers as McDonald’s, Pontiac and Kellogg’s.

A strong supporter of PBS, he has taped three concert specials for that network, which include Jim Brickman at the Magic Kingdom — The Disney Songbook (2005), My Romance, An Evening With Jim Brickman (2000) and Love Songs and Lullabies (2002). The 2009 PBS concert special Beautiful World is inspired by his many travels and his memorable experiences of music bridging borders and cultural divides. Its theme of friendship, healing and connecting cultures includes the quintessential Brickman sound and unites worldwide musical influences.

Taking his popular live concerts to more than 125 cities each year, Brickman has received international acclaim as a concert performer. Recently, he performed on his fourth sold-out “Jim Brickman Cruise,” a unique event that has become an annual fan favorite. In 2008, Brickman teamed up with American Greetings lending his music to create some of their best-selling eCards to date.

Other artistic endeavors include a weekly radio show, Your Weekend with Jim Brickman, two best selling books Simple Things and Love Notes and debuts at Carnegie Hall and the White House, as well as international touring from Spain to Thailand. He performed at ABC’s Gala for the President at Ford’s Theatre, was music correspondent for NBC’s Today, and hosted the A&E special Winter Solstice on Ice.

For his Whiting performance, he will perform new music from his latest CD, Beautiful World, along with well known favorites including “Valentine,” “Angel Eyes” and “If You Believe.”

Ticket prices range from $23-53. The Whiting also offers Student Rush tickets for the concert. For $12 each, students age 16 and older, with a valid student ID, can purchase tickets to the best seats available on the day of the performance.