… And the walls came tumbling down 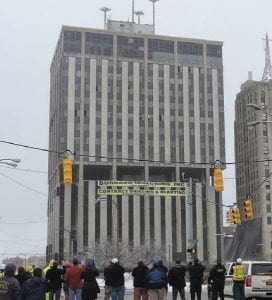 FLINT — Memories from many Christmas, New Year’s Eve and other special celebrations were made in the tony University Club atop Genesee Towers. But last rites were held on Sunday for Genesee County’s tallest building when the 19-story structure was imploded after months of planning.

At precisely 10 a.m., the sound of the first blast echoed from inside the building which remained standing. But with detonation of the second and final of about 1,000 pounds of explosives, the top of the building slowly keeled left and within seven seconds crashed down in a pile of dust and rubble.

Early aftermath reports indicated that the implosion went better than planned, according to Elaine Redd, director of communications and public relations for the Flint & Genesee Chamber of Commerce. Utility crews moved in to make sure that all was well before law enforcement officials would give the all clear, she said. Perimeter roads surrounding the blast site had been closed as early as 7 a.m. but were expected to be reopened by 1 a.m. 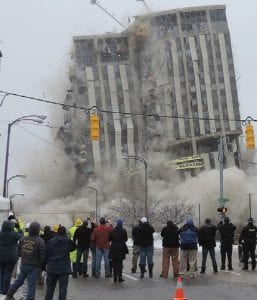 However, the dust and rubble from the Genesee Towers will take several months to clear, said Dave Lurvey, project manager/consultant for Siwek Construction, in a press briefing on Friday.

“It’s a tough task bringing down a 19-story building close to other buildings and it needed to come down in the most logical fashion,” said Lurvey.

Master blaster, Steve Pettigrew, is a nationally recognized demolition expert who has worked all over the world for nearly 40 years. He is based in Jacksonville, Florida.

There was no reported damage to the Mott Foundation building, which regains its status as the tallest building in Flint. The 16-story Art Deco structure was built in 1930.

Genesee Towers was built in 1968, named after Genesee Bank, which occupied the lower floors for several years before being renamed. The building itself changed hands a few times and gradually deteriorated before the bank — last major tenant – moved out in 1999. Genesee Towers was condemned in 2004.

On the difficulty of razing the Towers, Pettigrew rated it about a six or seven on a scale of 1-10. He described a timed process in which explosives were set off within milliseconds of each other to create structural failure.

“We are actually going to ease the building over on the north and west side into the middle,” he said.

That plan left most of the estimated 40-foot pile of rubble in Harrison Street on the east side of the building.

Lurvey estimated that site clean up will not be completed until late spring.

Plans are to turn the site into an open plaza with green space.