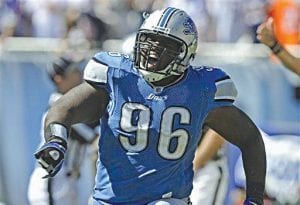 Detroit’s Andre Fluellen will be at Grand Blanc June 18-21 to headline the football camp.

The five-year Detroit Lions player out of Cartersville, Ga. and Florida State recently re-signed with the team after taking time off to deal with the sudden and unexpected death of his father, who collapsed after playing in a charity basketball game. With the Lions, Fluellen has 28 tackles, 18 assists and 2.5 sacks.

“It’s a benefit for all who take part,” said Chris Fritzsching, Director of Detroit Lions Youth Football. “We teach the pieces of the game in a fun and educational manner. It’s not just in playing the game, but in giving knowledge and a starting point for all positions. Not all kids will go on to play high school or college ball, so we just help the kids understand the entire game with the skills we will be teaching.”

In past years, Imlay City grad and former Detroit Lion David Kircus headlined that camp that draws kids from all around the area. At the time, Kircus was about to enter his rookie season with the Lions.

Fritzsching noted that for the player chosen to headline the camp, it’s not just the interaction with the kids, but more times than not a golden opportunity for him to give back to the community and to the fans who support him and the Lions during the season.

“For the intermediate players, it’s an opportunity to hone those skills they already have. We don’t know the makeup of their team for the upcoming fall, so they can just gain that knowledge to put themselves on the field as much as possible, to find a playing spot on the team.”

Frtizsching added that it’s not just about the football.

“The players we select to lead the camps are the ones that like interacting with kids and can talk about their backgrounds and give the kids a positive attitude and character traits that are key for sports, and for life,” Fritzsching said. “We help them understand about goal setting, communication and being successful as part of a team and beyond school into their ultimately work and family lives.”