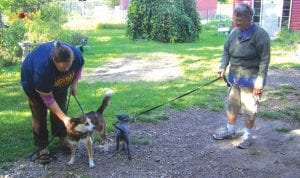 Glenda Beatty, the president of PAWS Rescue in Clayton Township, looks on as Sloane Slagg, the kennel manager at the rescue, walks one of the dogs that is currently housed at the facility.

SWARTZ CREEK — The Genesee County Animal Control was assisted by Clayton Township Police in executing a search warrant at the facilities of PAWS Rescue, a rescue operation for dogs and cats in Clayton Township, whereby a county veterinarian examined all the animals at the location.

Clayton Township Police Chief Michael Powers said it was his understanding all the animals at the PAWS Rescue were in good physical condition.

Glenda Beatty, the president of the PAWS Rescue, said on Aug. 29 Genesee County Animal Control pulled in her driveway and told her they were there to take the dogs.

Beatty said she then ran in the house and locked the doors. She said she tried to let her personal dogs out of her house so Animal Control would not take them.

Beatty further said the police tried to gain entry in her house, when she proceeded to open the door for them. She said she was handcuffed, put in the back of a police car and taken to Genesee County Jail where she was released later that day at about 6 p.m.

Powers said a person was arrested at the scene for resisting and obstructing, but he could not provide the name of the person as the case was currently under review by the Genesee County Prosecuter’s Office.

Beatty confirmed a county veterinarian was at the scene to inspect the animals..

“They inspected every dog and cat on the premises,” Beatty said. “They were sure they were going to find them in terrible shape.”

Beatty added Animal Control left the premises of PAWS Rescue without taking any of the animals. Since spending the afternoon in jail on Aug. 29, Beatty said she has not heard anything from Animal Control, the police or the prosecutor’s office.

Calls to the county agencies by View Newspapers were not responded to at press time.

Beatty said the inspection of the animals at PAWS Rescue was conducted after a former dog trainer for the rescue quit angrily after having several issues with the PAWS Rescue board and made complaints to Animal Control about the facilties. Beatty further said the former dog trainer signed an affidavit accusing the rescue of treating animals poorly, being overrun by rodents and having too many animals at the site.

PAWS Rescue is a rescue operation for dogs and cats and is located on 10 acres of property off Seymour Road. It consists of about 25 dog kennels, a dog run and a dog path along the outer edges of the property where the animals are walked.

However, Beatty said due to zoning restrictions PAWS Rescue cannot have a kennel license at its current location.

“That is one of the biggest gripes Clayton Township and Animal Control have,” she said.

Beatty said the rescue is in the process of applying for a special use permit that would allow them to have a kennel license until they have the money to move to a new location. Beatty added the rescue is looking to build a new facility within the next two years.

PAWS Rescue is managed by a five member board, and the care of the animals is conducted by paid employees as well as volunteers. Beatty said volunteers give their time at the shelter seven days a week, and their main duty is walking the dogs.