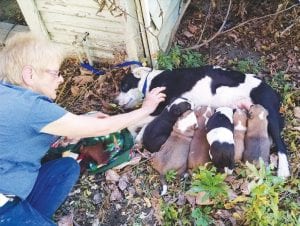 Edith Campbell checks out the puppies she helped rescue from an abandoned garage. The dogs will be ready for adoption soon.

CLAYTON TOWNSHIP – Edith Campbell has rescued a lot of dogs, but her most recent retrieval was one she won’t soon forget.

As a volunteer with Pets in Peril, the rescue arm of the Clayton Townshipbased PAWS animal shelter, Campbell and others periodically deliver dog food to people in economically-disadvantaged neighborhoods.

“We see lots of things,” she said. “And sometimes people tell us things.”

Recently, the denizens of one of Flint’s north side neighborhoods told the PIP crew about a homeless animal that was about to have puppies.

“People had reported to us that they’d seen this dog,” said Campbell. “They said she’d been out there for a couple of years, and that she’d had puppies last year. Everyone knew about this dog. I said, ‘We’ve gotta find that poor, dang dog.’”

Campbell and fellow PIP volunteers Heather Poster and Marsha Eagle searched for weeks before finally spotting the dog, a border collie mix, lying in the sun near an abandoned house.

“She didn’t look too good, but she looked like she’d had her puppies,” said Campbell.

Campbell approached the dog and, little by little over several days, earned her trust. Campbell named her Bree, a moniker she says means “strong Irish girl.”

The volunteers had cleared one hurdle, but they still had to find the puppies.

“Heather had seen on YouTube how to make a recording of puppies crying, to help find missing puppies,” said Campbell. “She put it on her iPhone. When Heather came over with the recording, mama dog lifted up her head and ran under the garage.”

The next problem was getting to the pups. The access point was barely big enough for mama dog, not to mention the floor was rotted, Campbell said.

The intrepid rescuers pressed on.

“Heather got a crow bar and started tearing up the floor,” said Campbell.

Poster then lay on the “nasty floor” and plucked out six chubby puppies, about 3 weeks old.

The following day, Eagle returned and discovered seventh puppy who was clearly unhappy about being overlooked, Campbell said.

Mama and her brood spent the next couple of nights at Beyond the Basics, a doggie daycare in Burton. The animals were checked over at Swartz Creek Veterinary Clinic, then transferred to a foster home in Flint Township.

The pups were in good health, but Bree was underweight, anemic, infested with parasites and suffering from heartworm, Campbell said.

“She’s a very passive dog,” she said. “I guess people stole her first set of puppies. Nobody cared about her, apparently.”

When the pups — five boys and two girls — are ready for adoption, PAWS volunteers will show them off at the Grand Blanc Petsmart. PAWS has adoptable animals at the store on Sundays. The pups also will be listed on Petfinder.com.

The babies should be ready for new homes around Christmas. Mama will need months of recovery before she’s up to par.

“She’s a wonderful dog,” said Campbell, who called the rescue “a miracle.”