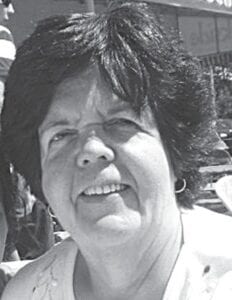 ANITA LOUISE BROUSSEAU, 73, of Burton. Anita went to be with her Heavenly Father on 12/22/2020. Born Anita Lade, in Polson Montanna in 1948, she joined the Navy and became a stateside nurse during the Vietnam War. During her service, she met and fell in love with a fellow serviceman. They relocated to Genesee county to marry and raise a family. Known on the ICU floor as “Anita from Davita”, she served as a hemodialysis nurse for over 40 years and was an ardent supporter of organ donation. She was happiest while helping others and doting on her grandchildren. Anita found comfort in her Catholic faith, was a member of the Daughters of Isabella of St. John and Blessed Sacrament and dedicated her life to being a cheerful giver. She is survived by her husband of 47 years, Page Brousseau III, her children and their spouses Page Brousseau IV, Amanda Brouseau, Heather Thomas, Ben Thomas, grandchildren Madelynn, Benson, Elijah, and Ava, brother Bill Lade, brother-in-law Robert Cook, sister-in-law Marlene, and many loved nieces and nephews. Anita was preceded in death by her parents, Elmer and Francis Lade, siblings Dick, Connie, Betty, Frankie, and Margie, mother-in-law Paula Brousseau and father-in-law Page Brousseau Jr. A memorial service with military honors will be held at a later date.