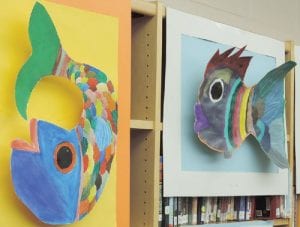 Below, Josh Smith, an eighth-grader at Carman- Ainsworth Middle School, shows off two of his creations presented last week at the annual student art show. Borrowed from a wood carving technique, students used acrylic paints to create these textured, whimsical fish, glued in a way to create depth to make them pop out.

FLINT TWP. — An eye-popping assortment of colorful fish swam across the top of bookcases in one corner of the Media Center at Carman-Ainsworth Middle School .

They competed for attention with a vivid collage of flowers in another corner of the room. Also commanding attention were a flotilla of hot air balloons wafting towards the ceiling using a patterning technique called Zentangle.

This visual feast covering almost every surface in the room were results of two semesters of art work by talented middle school students, and was put on display for the annual CAMS Student Art Show and English Language Arts night last week.

None were for sale or part of a competition.

“It is more of a gallery experience,” said Kelly Crandall, CAMS art teacher and curator who selected works that were finished, used technique correctly and were visually appealing..

Students chose which patterns to use to create the Zentangle hot air balloons. Crandall said the method uses a blend of pattern, design and meditation and was created by a husband-wife team. She was an artist and he was a monk. 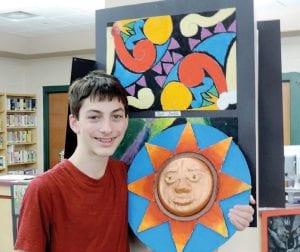 Together they came up with the Zentangle concept that “went wild on the Internet,” Crandall said.

Crandall also introduced her students to a method created with India ink blown through straws to create leaves for a Japanese tree design.

Colorful suns spread throughout the room were made of plaster craft, paint and cardboard. Colorful dragons done in oil pastels, block letters, textured robots, enchanted kingdoms and much more were all part of the colorful display of talent.

An English Language Arts event held on the same night showcased and explored student’s creative ability on the language side, including guest author appearances and other hands-on activities.