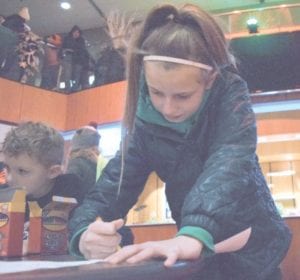 The Holiday Walk occupied the decorated 33-acre campus of the Flint Cultural Center. Holiday light displays welcomed visitors. Food trucks were available, as well as snacks at all the venues. The event was free, but visitors were encouraged to donate non-perishable food and personal care items to the Food Bank of Eastern Michigan, which was collecting donations on site.

The Flint Institute of Music held musical performances during the evening, and visitors took selfies in a giant Nutcracker rocking chair and explored the instrument playground.

Meanwhile, a bell choir, “Ringspiration,” performed at the Flint Public Library, right across the street.

One of Santa’s visitors was Carter Wheat, 4, who was visiting The Whiting with his little brother Logan, 2, and his mom, Jennifer. Santa was set up on The Whiting’s stage, so all of his visitors were accommodated.

In a post-Santa lap sitting interview, Carter shared his impressions of Santa. “I like him, he’s friendly, he’s nice.” And when Carter was asked if he thought he would get everything he wanted for Christmas, Carter replied unequivocally, “Yes.”

At the Sloan Museum, two lovers, who turned out to be a married couple, were taking a selfie in front of the Christmas tree in the Sloan Museum lobby. Jessie and Brad Pittenger have been attending the Holiday Walk for seven years, “We come every year. It’s just a good event for fun, really. We’ve been coming here for seven years, and we have lived in Flint for about eight years,” Jessie said.

A popular exhibit at the Sloan was Winter Wonderland, a miniature Christmas village, made up of over 200 miniature buildings, people, and lights, all set to holiday music.

Steven Waterstradt is one of the organizers behind Winter Wonderland. “This is the work of about four dedicated people, there’s actually seven total that helped work on this, it took seven months to plan and build.”

Waterstradt explained his love of model trains and his involvement in this project, “I ‘ve been into model trains pretty much all of my life, so Scott Schneider, who is responsible for all the Christmas village portion of the display, knew someone here at the Sloan, and he told me that the Sloan wanted model trains going through it, so then he asked if I would be interested in doing it.

When asked what Waterstradt wanted for Christmas, he said, “I could always use some more trains. I’ve got a full basement, but I can never have too many.”

The date for the 2018 Holiday Walk has already been set for Dec. 4.