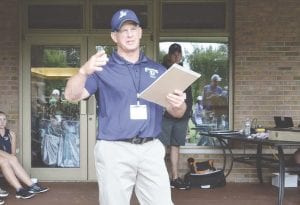 LAPEER – Tomorrow marks the return of the annual Lapeer girls’ golf Tune-Up, held at Lapeer Country Club. A total of 14 teams will compete in, what will be for many of the them, their first match of the season.

Joining host Lapeer in this season’s Tune-Up are Birmingham Seaholm, Brandon, Cranbrook, Flushing, Goodrich, Lake Orion, Lutheran North, Oxford, Rochester, Rochester Adams, Saginaw Heritage, Utica and Utica Eisenhower. Though the tournament field is much smaller than previous years, down from 20 teams a year ago, the competition will be as fierce as ever. Multiple teams in attendance competed in last fall’s Div. 1-3 state finals, with all but Goodrich having competed in last year’s Tune-Up as well.

Last year, Lake Orion took home its fourth-straight Tune-Up victory with a 348 and looks like the team to beat this season following its eighth-place finish in the Div. 1 finals last fall. Utica Eisenhower and Rochester also competed in the Div. 1 finals last season, finishing 13th and 17th, respectively. Eisenhower was ninth at last season’s Tune-Up with a 385 and Rochester was 12th with a 401.

Host Lapeer finished third at last year’s event with a 360 but its potential will be unknown after having lost three of its topfive golfers to graduation. Birmingham Seaholm finished fourth at the Tune-Up a season ago with a 361 and was sixth overall in the Div. 2 state finals while Cranbrook finished sixth at the Tune-Up with a 370 and fourth in the Div. 3 state finals. Rochester Adams was 10th at last year’s Tune-Up with a 390, Saginaw Heritage 11th with a 397, Flushing 13th with a 405, Oxford 16th with a 420, Utica 18th with a 460 and Brandon 19th with a 642.

The action kicks off tomorrow at Lapeer Country Club.