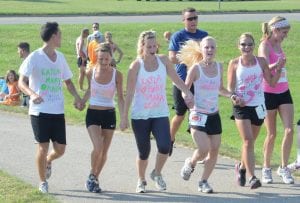 GOODRICH — You’ll want to bring an extra pair of running shoes to the annual Kayla O’Mara Road Race in Goodrich, now entering it’s eighth year as a staple in the community.

That’s because a shoe donation has been added to the festivities. The popular race began as a memorial for the late Kayla O’Mara, then 16 years old, who passed away after a car accident that critically injured her twin sister Kaitlin and their best friend Danielle Bila. The now-23-year olds headline the race each year with a close circle of friends all wearing hand-painted matching running tops adorned with messages of love for Kayla.

The event has become extremely meaningful to the Goodrich community, and in recent years a handcycle race and other fresh pieces of the race have been added. 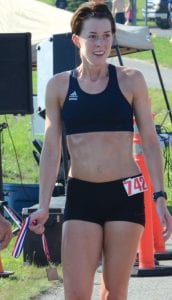 Event organizers have connected yet another giving-back donation opportunity to the race, as a box will be set up at Goodrich High School, where the registration takes place, so that participants and other locals can donate used, yet still wearable running shoes for those less fortunate. The shoes will be given to inner-city track programs.

The annual race in her honor got underway for the first time just months after her passing and has been one of the highest attended events in Goodrich each year, which also includes heavy participation from her sister, Kaitlin, as well as several of their friends from Goodrich, several who went on to successful collegiate running careers.

Most notable was Janee Jones, who ran for Harding University. Kaitlin, along with her close circle of friends Kelsey Meyers, Jones, Jeremy Phan, Sam Minkler and in past years, Kelsey Krych and others always join hands and cross the finish line in unison in honor of Kayla.

The post-race party, which will include pizza, fruit, water, gatorade and giveaways, will commence at 8 a.m. near the track with the 5K run/walk beginning at 9 a.m. and the fun run/walk follows at 9:45 a.m., both of which take place in front of the high school. The awards ceremony will occur following all events at 10 a.m. near the food tent.